Amy's Frozen Meals: Are They Healthy?

The questions keep rolling in about the frozen foods aisle and I am ready to go! 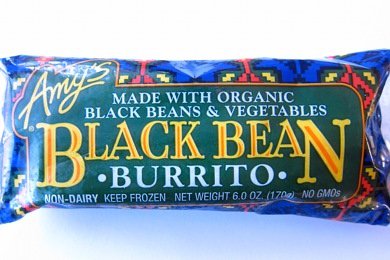 Since this review posted, I have done another Amy’s Frozen Meals Review in 2016.

I am being pushed into the frozen meals section by my loyal readers. Another request came from Jahna, a college student. From Jahna:

Amy's have always seemed to be a little bit healthier alternative to most frozen meals (Lean Cuisine, etc.) but I know they are still very processed? and always have a LOT of sodium, a major problem with most prepackaged meals.

The low sodium meals options cut sodium in half -so is it a good choice for a meal??

Or still not as good as cooking yourself? I'm in college and it's great for a fast meal when I don't really want to cook all the time!

Thanks, Jahna! Actually, I didn't read her question carefully enough and I went out and bought this Amy's Black Bean Burrito because I thought it looked good. The first thing I noticed about the Black Bean Burrito was the sodium at a whopping 680 mg or 28% of your daily value of sodium. And, I found the burrito to taste good - but salty :)

BUT, the ingredients list was impeccable with organic black beans and vegetables. The great thing about frozen foods is that they use zero preservatives. They don't need them because the freezing process preserves the meal.

Every ingredient in this burrito was recognizable and healthy!

Jahna was interested in the Light in Sodium meals which include burritos, macaroni and cheese, and a Mexican Casserole bowl.

Let's take a look at what I was supposed to be reviewing. A "Light In Sodium Black Bean Enchilada"'s nutritional facts:

I didn't taste it - but I might go give it a try. Again, the ingredients are pinto beans, whole wheat flour, brown rice, cheddar, etc. (you will recognize them all) and I would say this is a healthy choice.

Jahna, if these had been available when I was in college (yes, dinosaurs walked the earth at that time), I would have eaten them. They contain real ingredients, no preservatives, and have excellent nutritional value (as long as you stick to the low sodium variety).

It has been a long time since I last took a look at Amy’s frozen meals.....

How Unhealthy Is Lean Cuisine?

Lean Cuisine is a brand of frozen meals created by the Nestle corporation. How bad are they for you?....

I do like several Amy's products, but I'm not sure why they can't get "over the hump" and get their products to at least 95% organic so they can get USDA certified.

I adore Amy's Meals when I'm in a pinch for time and need to heat something up quickly. I have Celiac disease and Amy's provides SO many amazing, delicious options that are gluten free. The Indian Meals are great, and the tofu stir fry meals as well. They always seem fresh and just delish! :)

I like the Amy's meals. For awhile I couldn't convince my son (20) to eat anything remotely healthy. One day he grabs my Amy's black bean burrito and loved it. Even asked me to get more.

OMG yes frozen food that's healthy (or relatively speaking)!! :D i'm so going to check this out, it's going to make life so much easier every once in a while :D

I love Amy's meals their pizza's are great and I buy them whenever they are on sale at the supermarket. They taste more fresh then other frozen meals out there and while they do have a lot of sodium I think they are one of the best alternatives for people who want something healthy and don't have time to cook.

I recently discovered Amy's Vegetable Lasagna. YUMMY! It has a good spinach taste and is very satisfying. Last time I heated one at work, I heard lots of comments from people wanting to steal my lunch. I keep several in my freezer for quickie dinners.

I didn't care for the Tortilla Casserole (I think that's what it's called), but have loved everything else I've tried.

I keep cans of Amy's soup hidden away at work so I always have a healthy fast easy food option. (I would keep frozen Amy's at work but there's no good way to hide things in the freezer and invariably someone else eats it before I need it. There are many many places to hide cans, though...)

I like Amy's products like their soups and sometimes their bowls for lunch--and love their pizza with a salad as a meal. But I really wouldn't think of something like a burrito as a "snack." I think of something as a snack that has 100-150 calories, MAYBE 200...

When my weight goes up a bit, it's not usually because I've suddenly started to junk out--it's because I've become less vigilant about calories and portions for foods I think of as healthy, and started eating according to my appetite instead of calculating what will enable me to stay in my jeans!

I have natural restraint when it comes to treats like chocolate that I KNOW are fattening--it's harder sometimes to stay vigilant with foods I think are "healthy."

I love their Indian meals and their spinach pizza especially.

Amy's is def better then most main stream brands ...but most of their products are very high in sodium. It takes about two minutes to prepare a burrito from scratch. And is a lot cheaper. Stock your fridge with organic shredded cheese , whole grain tortillas, and add some canned black beans. Eden Organic is the best brand since their cans are BPA free. Throw together and pop it in to the toaster oven.

Question. I couldn't find Amy's at Marsh... so I left w/ nothing. Then when I got home I started looking at labels online and it would seem that Tina's Burritos had fewer cals, fat, sodium... though not organic. Is organic that important in this situation?

@Theresa - no, I don't think organic is important in this situation. If it has ingredients you can identify - and isn't high in sodium, etc., it is most likely a healthy choice. To me "organic" is like icing on the cake.

I've always wanted to try the Amy's products. They do afterall appear to be more healthy than most frozen options. However the biggest problem is that they are just so darn expensive (at least in my area).

I only buy the "lower sodium" items, with the brown rice veggie bowl with tofu my favorite (after sprinkling red pepper flakes and stirring them in). Unfortunately, the package of lower sodium enchiladas isn't Amy's standard one serving -- it is two. So, double that and it is nearly 50% of a low sodium diet. Keep in mind Amy's does not call these products LOW sodium because they are not! Lower is correct. Snack Girl incorrectly states that Amy's contains no preservatives, but salt is a preservative.

I absolutely love Amy's ANYTHING. They put a lot of thought and concern into their product (of course along with the great ingredients). I fill my freezer full of these products when they are on sale. Whenever I eat Amy's products, I feel no guilt whatsoever because I know I feel satisfied and happy. Also love her pantry items, like salsa and soup, I buy cases of this stuff!

If you like ants you will absolutely love Mediterranean meals far less sodium, fat, calories than any other frozen meals no additives or preservatives- you can actually read and know exactly what you are putting in your body- a very clean label

Meant to say if you like Amys not ants

This manufacturer has had MULTIPLE RECALLS on its products please be cautious, Amy's is withdrawing 4,800 meals of the product from all states in the Eastern time zone in addition to Alabama, Arkansas, Minnesota, Illinois, Missouri and Kansas .

I love thier food!!! Since I am pregnant it is just not worth the risk

I would starve without amys. Dont cook for myself. Conjestive heartdisease. As long as keep count of soduim and eat lowersoduim products i am ok. Just got to be vigilant in counting soduim. Love all their lowersalt products and caneat organic YEAH!

I love Amy's burritos, but since I've been pregnant (more keen senses?) all I can taste is the salt! :(

I love Amy's burrito's for breakfast because I'm not huge on sugary breakfast items. However.. I thought it was hilarious that someone said it takes 2 minutes to slap a burrito together. Really? I know by heart black beans alone take 2.5-3 minutes in the microwave. Not that it takes that long to make a burrito, but you can't say that it's faster to make a burrito from scratch vs. frozen. I also did the math on the pricing of a homemade burrito with tortilla, cheese, black beans, and sour cream. The total came to $2.31. An elov, Red's, or soulforfood(my fav) burrito costs $2.49 at Earthfare.

The best frozen dinners, I have found are the Kosher ones. They seem to have less sodium, fat and calories. Also,I actually know the majority of the ingredients.

I am in Canada and buy them at Loblaws grocery store.

I cook but am retired and like to have an easy meal some times. Must watch sodium but like flavorful meals. Just tried Lean Cuisine Chicken with Peanut Sauce (Culinary Collection) and hope they can do the same with some of their others selections as long as the hot spice is not overdone. I usually buy Healthy Choice.

I read that soy needs to be fermented to be healthy, and I was wondering if the soy in a lot of Amy's meals ( which I love) have soy in them. It really makes a difference to me. Please can someone answer this question.

if it's manufactured it's NOT organ and all products are GMO.

Oh man i was so nervous when i started reading this article! I love Amy's meals! I usually "make" everything I eat, but every so often being able to throw something in the microwave after a tiring day is awesome. So glad the review was good!

I love some Amy's. I just now discovered this product and am very impressed. My favorite is the Mexican food. A healthier way to eat frozen foods for sure.

WHY DO YOU PUT SOY IN SOME OF YOUR FROZEN DINNERS ? It causes Breast CANCER IN WOMEN. ? I really like some of your frozen dinners but afraid of the soy added in some of them.