Become a Goddess: The Athena Division 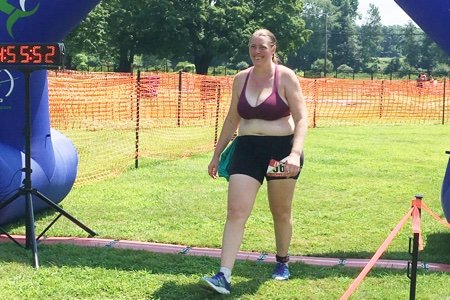 You see this woman in the photo? She is a Goddess.

Her name is Eileen and she was one of the last finishers of the triathlon that I did a few weeks ago. But, she didn’t do the sprint level – she did the whole Olympic triathlon. WOW!

She looked so happy and relaxed.

At that point, the awards had been given out and the post race lasagna had been finished but she was still out there – running her pace to the finish line. I had been encouraged to stay to the end to cheer in the last competitors and I am so glad that I did.

Eileen actually made it onto the podium! She raced as an Athena class of athlete which is over 165 pounds and there were only three in the race. They give out awards to the top three finishers. If she had been a bit faster, she would have gotten to go up and be cheered by the other participants as she accepted her trophy. How cool is that?

There is a male division called Clydesdale which is over 220 pounds and is not a very good name. Who wants to be a horse pulling a truck full of beer? But, I think it is great for larger men to feel included in triathlon.

At any rate, Eileen is an Athena and so am I – photo below. 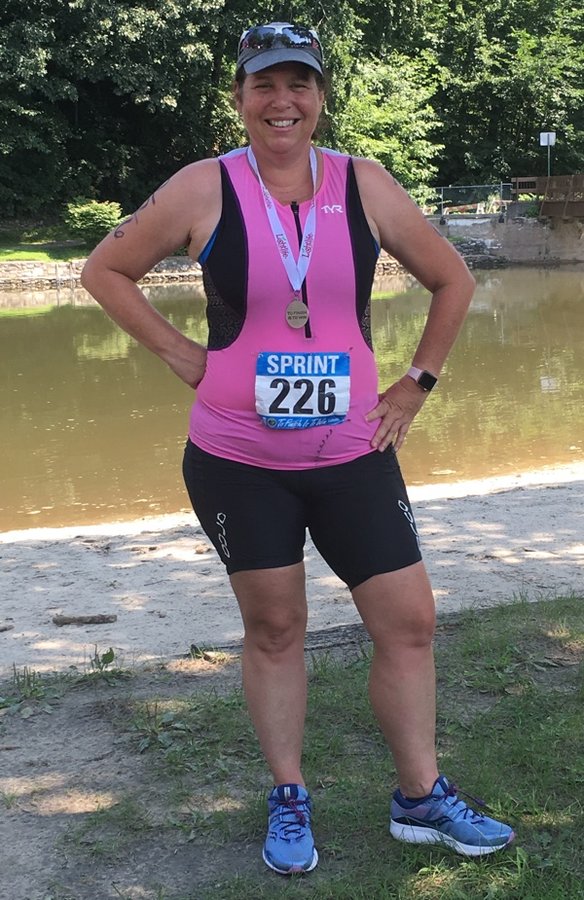 I haven’t seen 165 on a scale for a loooong time. I weigh 188 pounds and I don’t think I’m getting any smaller. I could have chosen to compete in my age division if I wanted to – but I liked the idea of being called a goddess.

You see, triathlon embraces people of a larger size. You can buy triathlon competition clothes up to the size 6XL and find Facebook groups devoted to the Athena and Clydesdale divisions.

Before I started my triathlon journey, I worried about what I would wear and found a supportive blog about being larger and finding the right clothes. I had so many questions about the clothes because of the size of my breasts and booty. Because of Athena, the answers were out there.

There are many stories of 250 pound (and up) people who couldn’t swim 8 laps who trained and went on to do triathlons. They are not stories of weight loss but of getting fit and becoming part of something healthy.

Athenas hang together as a group and support each other. I started with 9 Athenas and when I was out on the course – as they passed me (as they frequently did) - I would hear, “Go ATHENA!!!”.

You have an A (a scarlet A :) written on your calf if you decide to compete in the Athena group so anyone coming behind you can see your designation.

I haven’t done many sports like this except run 5Ks – but I think that this weight division is very unique. I absolutely adore how it encourages people who may not look like the Wheaties version of an athlete.

There is a place for larger women and they get to be called ATHENA. How cool is that?

Does having an Athena division make you interested in triathlon?

A Beginner Triathlete Has Been Born

It is a little hard to believe since I have been writing about this for over a year – but on Sunday, August 5th, I completed a sprint triathlon....

Well done! You are an inspirational goddess. When is your next race? Thanks for doing what you do.

Congratulations! What an amazing accomplishment! I think you’re a goddess.

Congrats on your triathlon and thank you for sharing your story of Athenas. I just showed it to my 22 year old daughter who is obsessed with her weight and size. I tell her all the time it's not about how you look but how you feel.I love that Athena is not only a goddess but also a warrior. You are an inspiration!!

You are totally a goddess.

Well, it's about time! From one Athena to another, congratulations to you! You are truly inspiring to all of us in so many ways. Well done!

Good job! You are an inspiration:)

I always have the conflict to run AG or Athena. I never know if I'm officially Athena until race day so I often opt for AG. I weigh between 162-167 at any given point, LOL. I really just want a podium win at some point again (I podium my first sprint ever in 2016!). I just entered my AG so was hoping for it this year but wound up in 4th place. I checked race results and I would have come in 4th for Athena too. There were 7 Athena entries and 7 in my AG...a real toss up.

I never knew about this division. I like it, though!

I had heard of Athena and Clydesdale division before, but honestly thought that was degrading. Now that I read your post, I have completely changed my mind. I think it's great to have those divisions so everyone can participate and have that support. Way to go on your triathlon!

You ARE a Goddess!
You go, girl!

So lovely to be all inclusive! No one should ever feel left out because of their size!! Love it!!

Thank you for this post! I'm almost 72 and 174 pounds (5 feet even). I've lost weight several times in the past decade and always gained it back, so I'm finally realizing that diets just don't work for me. I can't stick to a regimented way of eating. But in that past decade, I've done a lot of activity that many thinner, younger people say they would never try because it's too hard: walks of four miles to the gym for a step aerobics class, spin classes, innumerable very long walks. Yet I've still felt like I was "lazy" and out of shape! I'm starting to recognize that people who are "overweight" by society's standards and people who are "old" by society's standards can do a lot -- just because a person is older doesn't mean they have to limit their horizons to fit anyone's stereotype. Of course, I'm fortunate not to have knee, hip, or back problems that limit me -- I know many people do, and that may be in my future; I don't know. But I just hate being told that I should "think of my age" when deciding what I can do! My mother was a runner until she was 82, and my father biked all over town to yard sales until his late 80s. So I know that age in itself doesn't have to define me.

Absolutely yes: I really **love** the idea of becoming fit at any weight and size.

Awesome story! I didn’t know that!

Eileen and Snack Girl are true inspirations! And YOU, Miss Sue Hubley, are the Queen of inspiration!!

I gained about 30 pounds from 60- 63. I have yoyoed for most of my life. I am back to honoring my inner jock and I feel so good about it. Of course my inner jock at 40 looks really different now. What is also really great is that I am not weighing myself and getting caught up in that hamster wheel. Working out whether it's resistance training or a very slow "wog" just feels good. When and if I am ready I might focus on weight loss.
Lisa were you at the Norman Rockwell museum on Saturday? If you weren't you have a double:)