High Fashion Needs To Get A Clue 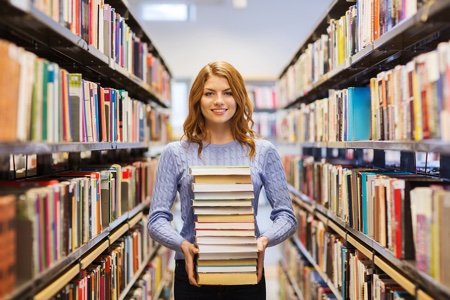 The above photo is of a teenage girl visiting the library. This is the kind of image that I wish my 11-year-old daughter would see in magazines.

I know some of you are laughing right now. Teenagers with books instead of make-up and cool shoes? What have I been smoking?

Christian Dior, a high fashion house based in France, recently used a 14-year-old model at a runway show. She wasn’t wearing a sweater and jeans – you can see the photos here: Dior Couture Show.

Her outfit was a long sheer dress which clearly shows her breasts and her white underwear. It was basically like wearing a gauzy curtain over her body. I find this shocking and Dior seems to want to shock.

You know what would be truly shocking, Dior? Using women with hips, breasts, and wrinkles in your show to emphasize how gorgeous, amazing, and sexy WOMEN over the age of 40 can be.

From the New York Times:

when you dress children up in makeup and heels, the implication is that they are sexual objects, and more often than not, that is how the images are read by the public.

Is a 14 year old supposed to look like a sexual object? The age of consent in France is 15 so I would argue that she is too young to be objectified (by a hair).

Do we want to go back to the 1980'a when a 15-year-old Brooke Shields announced, "You want to know what comes between me and my Calvins? Nothing."

Women don’t want to look like teenagers – they want to look like women and using under-age models to sell your clothes is perverse. Dior doesn’t care about how women view themselves nor does the line care about sexualizing children. I realize that they think that this “look” will sell clothes.

When I discussed the latest younger models with a retail executive (and asked him why retailers don’t put pressure on designers to use age appropriate models), he stated, “It is like asking an artist not to use red paint.”

Teenage girls should not be treated as objects to be used in a “show”. This young model is a person and it is hard for me to believe at the age of 14, she made a mature decision to show the world her breasts.

These girls are being exploited – yes they are getting paid – but their pubescent bodies should not be for sale.

What I can't understand is why a fashion line thinks they need to "dress up" a child to get a sexy look. Why can't you simply dress up a sexy woman?

What can we do about it? Boycott Dior – but I couldn’t afford that stuff anyway. I’m not sure how to stop them – any ideas would be appreciated.

What do you think of using a 14-year-old model to sell clothes to women?

If my neighbor posted a pic of a 14yr old like that most likely he'd be arrested and possibly labeled as a sex offender. I can't imagine those in the industry getting arrested however that would be the big shocker.

Thank you, Lisa,
This youth thing hurts females of all ages!! Objectifies and sexualizes young women while leaving mature women out in the cold. No wonder we all have problems with body image and eating disorders abound. Thank you for bringing this to our attention. It is the business of men as well!!
Jennie

Hi Lisa,
Thank you, so much, for this article. Sorry to say, but until women band together, take action and speak up/out about things like this, it will always be a male-dominated society. Let's go ladies!

Great article!!!!!!! I'm glad you're not too busy or uninterested like some moms to fight the fight. Your daughter is a lucky girl! Thanks!!

Thank you for your post--I agree. That is exploitation, and I think it's going to cause some issues for these girls later in their lives. I love shopping and I love to look at the designer clothes each season (not that I can afford most of the stuff but I love to look!); however, being close to 40 and seeing these young girls modeling this stuff makes me even less likely to buy it--who wants to look like they're 15 at age 36? I don't! I'm not really sure who they're trying to sell to with these campaigns but I can't imagine that most professional women (like myself) would be influenced by that (offended, yes, but more likely to buy, no).

Excellent post, when my daughter was younger (23 now!) I struggled to find age appropriate clothes, not overtly sexy, covered with sparkles or all black. I hate the body image all these ads and campaigns are imprinting on young ladies and girls. Wrong message to give and it sticks on them and is rampant all over our culture. We need more influential people to object on this issue. Thank you!

Right on the mark, Lisa. My daughter is 14 and we have had great difficulty over the years finding non=sexualizing clothing for her. She is not comfortable wearing shorts and skirts that don't cover or shirts that reveal too much. She thinks the middle school girls who do act like sluts.

A slip would have made the look much classier. I do feel that it is great that this girl got her family out of poverty. The fact that you can see through her dress, however, is inappropriate.

Beauty is an intangible concept,which must be defined by each person and we must teach ourselves how to appreciate how we act, not how we look! Appreciation starts in our heads, not on a run way. We give up our image to others. It is time to transition to a higher level of consciousness, for ourselves and our children!

Koodo's Lisa. I am a grandmother of 4 girls, the eldest is 14-1/2 who already looks 25+, which terrifies me. I worked in retail for over 40 yrs. in the fashion and cosmetic worlds-thought I'd seen it all-Wow! I spent sufficient time in Paris scoping out new looks, techniques and trends-must admit there were younger models that disgusted me and I made my views known to the offending fashion houses. Boycotting can be very effective, but it's a long process, patience must prevail. Every manufacturing house makes knock-offs and similar items, so it's a long battle, but well worth it-our kids morals, welfare and safety are at stake-keep this cause alive.

WTH!!! At first glance I thought how pretty and angelic they made her look but then I saw how she is bare chested and the whole thing is see through! I am livid! Why oh why must we pimp our daughters like prostitutes and don't give me "oh it helped her an family out of poverty!" That Dior totally took advantage and I am only sad that she and her mother did not see her worth as a young lady and her future value as a woman...beauty fades but a good heart will last a lifetime, I am so disgusted.

I don't like any of the advertising tactics fashion houses use - many are questionable if not outrageous. They don't seem to care what they do to young women and they know full well the influencce they have.
Recently I had to stop following Marc Jacobs after their instagram feed had a model smoking and looking very cool (as part of a range called 'vices', which glamorised smoking, tattoos - which at least don't have the same health consequences - & more).
Did they miss the directive many years ago that banned advertising for cigarettes? I call this circumventing (or even flouting) the law. In both cases - 14 yr olds in semi-nude poses & models you want to emulate (especially if you're young & impressionable) advertising health-adverse actions. And most of the IG followers are young. All of them would jump at the opportunity to be featured, no matter the conditions (sexualised poses, etc.). Sex sells.
I (sadly) don't have much hope for improvement as they have been getting away with it for decades. It is a self-reguating industry and until sales are affected, it will continue. $ speak loudest.

What's with the back story on this rag to riches theme? Her mother works 3 jobs, they live in a one room apartment and she's discovered in a Dior store? Sorry, but why would she be shopping in such a high end establishment if they are claiming she was a "poor" girl.
Give us all a break. This is a marketing ploy at its best and it's got those of us who wouldn't and couldn't care less about Dior actually discussing their ugly line of cheap night gowns on the runway. If they didn't do this stunt, who would know or even care?

When my daughter was a teenager, we struggled to find appropriate clothing. These designer's are doing us no favors. Also, I definitely think that Dior took advantage of her but what about her parents?? I don't care how poor I was, I would have told my daughter no way are you wearing that in front of the whole world. Money should not be what life is all about!! The adults who should be guiding this girl failed miserably!!!

This is insane. We as a society place a premium on maturity. We tell people to "grow up" and the most insulting thing we can say to someone is they're acting like a kid or they need to act more adult. We complement young folk on acting "grown-up". We think that an adult is the neatest thing to be -- yet we have a problem with the concept of LOOKING like an adult? We expect female folk to act like adults and look like infants? That makes a lot of sense -- not hardly!

And I think it is disgusting to use a young teen to sell clothes to ADULTS because not only is it exploiting the teen, it -- like I said -- tells women that there's something wrong wih looking like an adult.