A Healthier Version of Potato Latkes 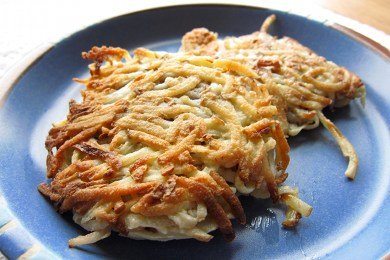 THE holiday food of Hanukkah is the potato pancake (AKA latke). The traditional recipe for potato latkes can include 3-4 cups of oil.

Yikes! (but that does sound delicious :)

I actually think latkes are a GREAT holiday food. Potatoes, onion, egg, and flour - there isn't anything but yumminess in the basic recipe.

And, latkes ARE nutritious when compared to Egg Nog, Christmas cookies, and candy canes. One latke has 24% of your daily value of Vitamin C - take that chocolate Santa!

They are also easy to make and will disappear fast if you make the mistake of leaving the room after cooking them.

First, I used my grater on my food processor. There was NO WAY I was going to grate 3 potatoes and an onion without one. This made making the latkes really fast and easy.

I squeezed out the liquid from the potato and the onion, added egg and flour, and then attempted to fry them with less oil than 3 cups. I used a cast iron pan and managed to use one tablespoon of oil for every four latkes that I cooked.

They were seriously tasty and left the plate as soon as I placed them there. If you are trying to serve people that can WAIT, put them in the oven at 200F to keep them crispy.

Other lighter latke recipes used zucchini, cauliflower, and sweet potatoes to lighten the recipe. These make a great, fast, easy and comforting last minute dinner. We served them with some chicken apple sausages. YUM!

Do you have a tip for a lighter latke? Please share.

Grate potatoes and onion in food processor with a coarse grater. Transfer to colander and squeeze out potato liquid. Mix eggs and flour into the potato-onion mixture. Heat a cast iron or non-stick skillet with one tablespoon oil until the oil starts to smoke.

Fill your palm with the potato mixture and pat into a 2 inch diameter circle. Put four pancakes into pan and cook until brown on both sides (about 6 minutes). After you remove the first batch, add one tablespoon oil to cook the next batch. Repeat with all of the batter.

Keep hot in a 200 F oven and serve! These taste great cold and room temperature as well (but they will lose their crispness).

Oh my do these sound delicious! And super easy. I don't know why I have never tried making these since we LOVE potatoes in my house. Plus it sounds like a recipe my 7 yr old would to help me with. Thank you for posting this! Have a great day :-)

Thank you for the lighter tip Lisa, these look and sound very tasty. My jewish step-mom always served these with applesauce and sour cream, not very light but so good. My first attempt with zucchini fritters this past summer was a bust--used grater, too mushy, could not squeeze juice all out. I'll try my food processor next summer or just hand dice. For potatoes, my step-mom used to wrap grated potatoes in linen towel and twist juice out.

Maybe you should soak the shredded potatoes in water for about 20 min. then drain and squeeze out. Seems like Cooks Country guy said to do that with french fries?? You could also partially cook the potatoes in the microwave so it wouldn't take as long to cook all the way through...

I've never tried my hand at latke's but I can't wait to try this recipe! Looks great and I love that I can explain Hanukkah to my boys while we are eating them!

Fran, thanks for those good tips, rinsing out that starchy goo is what I always do B4 boiling potatoes for mashing; don't know why I didn't think of this! Partial cooking makes sense too. I can't wait to try these now, for breakfast.

PLEASE do not let the oil smoke! That's when it produces free radicals and is extremely unhealthy. http://m.wholefoodsmarket.com/recipes/food-guides/cooking-o… is just one resource about this. Very hot and CLOSE to that point is great, and a food thermometer that can handle high temps is a wonderful help.

Thanks, Lisa for the Hanukkah shout-out. There are some baked latke recipes out there somewhere. Or try using an oil mist-spray. I've always thought of them as "organized hash browns." Very easy to throw in some grated carrots, zucchini or sweet potatoes and use a minimal amount of oil. Happy Hanukkah!

I've made them for many many years, and no, they will never taste as good as those made with four cups of oil. But...I do make healthy ones now, and they are pretty good. I use half shredded sweet potatoes, and half shredded white. I purée the onions so they don't have "pieces" that kids won't eat, add a little flour and matzo meal if you have access to it, eggs, salt and pepper. I then bake in a 400 degree oven in shallow muffin (or muffin topper) pans. Spray a little olive oil in the pans for authenticity. No need to turn, just don't make them deep. Serve with applesauce, or sour cream. Eat right away! This is not a problem for my family!

Thanks for those excellent advice, these look and sound very tasty. I can't wait to try this recipe.