Healthy Cool Whip is an actual product category. You can find alternatives to the famous Cool Whip brand at Whole Foods! 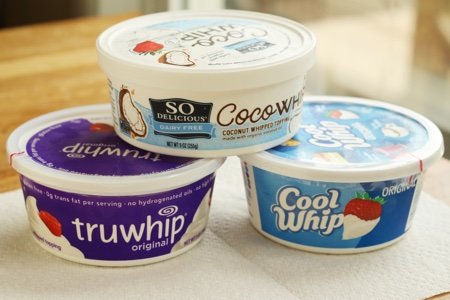 People seem to love whipped topping that comes in tubs but they don’t want to buy Cool Whip. Why?

All of these options have the same amount of calories, fat, and sugar but the ones that aren’t Cool Whip cost about twice as much. 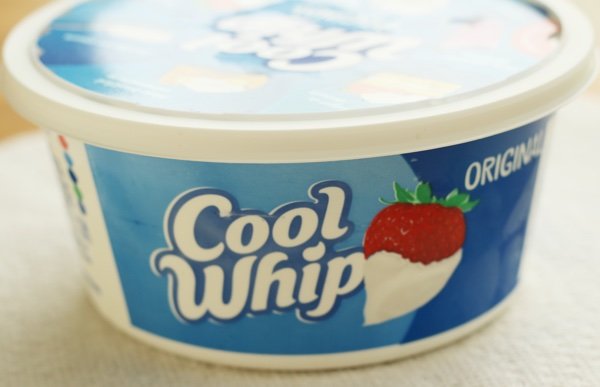 Cool Whip is simply water with corn syrup, oil, with some milk added (and a bunch of chemical sounding stuff), See ingredients here:

As you can see there are "hydrogenated vegetable oils", but there is no trans-fat in the product. I called and asked and Heinz Foods removes the fatty acids from the oil and just uses the oil for texture.

We all want the convenience of this product (don’t have to get out my mixer to make whipped cream) but is it actually comparable to whipped cream?

Cool Whip doesn’t taste like much and is kinda wierd. It is like a science experiment and yet people love it.

I tried two more brands that are attempts at healthy Cool Whip. I bought them at Whole Foods. I am evaluating whether I could find a tub of non-dairy whipped topping that I could get behind. 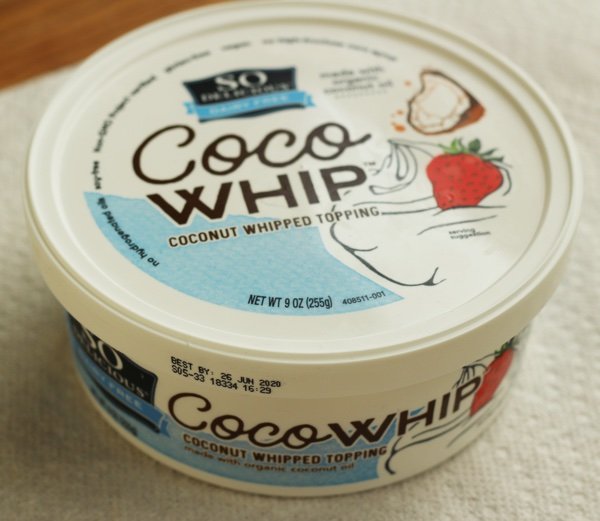 Coco-Whip is the same concept as Cool Whip except that So Delicious uses organic coconut oil as the oil in the product. Here are the ingredients:

Coco-Whip is almost the same product as Cool Whip except they use tapioca syrup instead of corn syrup. It is water with sugar syrup and oil. It does have far fewer wierd chemicals.

I don’t know if I would call this “healthy” but it did taste much better than Cool Whip. It had a lovely, light and sweet flavor of coconut and I could see adding this to my strawberries for a quick treat.

It is far lighter than ice cream (only 2 grams of fat for 2 tablespoons) so I think this a great replacement if you are looking for a quick dessert. 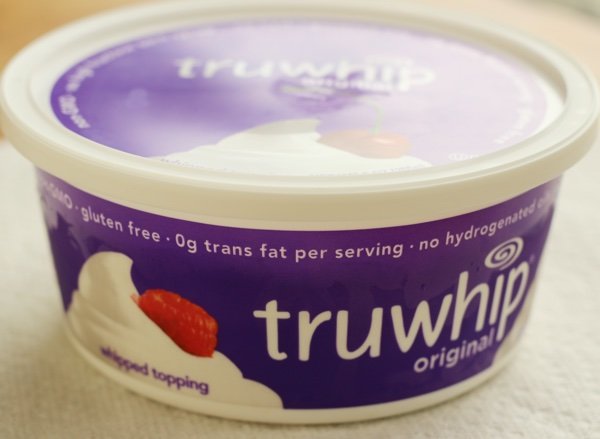 Truwhip is the original healthy Cool Whip but I don’t see much of a difference from the original. They advertise that there are no hydrogenated oils - and that is true - but those oils aren't a problem (trans fat) in Cool Whip.

Again this is water, sugar syrup, and oil. Truwhip is vegan but I would not run out and buy a tub unless I really loved non-dairy whipped topping.

Truwhip did have more flavor than Cool Whip.

My advice is to get out your mixer, grab some cream and a little bit of sugar, and make real whipped topping! You will save the environment (no plastic tub) and the flavor and texture will be divine.

Do you like Cool Whip? Have you looked for a healthier version?

So that is why cool whip and tru whip upset my stomach so much! It’s made with a milk derivative! I had no idea that sodium caseinate was milk... UGH. thanks for the informative article. I do love the So delicious brand line too.

Yes, just use the real whipped cream if you must.

Edible oil is not nice.

I like Gay Lea Whipped Cream. I usually get the light version. The chocolate is so good too. Here are the ingredients: Water, Cream, Sugar/Glucose-Fructose, Buttermilk Powder, Mono And Diglycerides, Carrageenan, Natural Flavour, Nitrous Oxide (Pressure Dispensing Agent).

It's not frozen, but still so good!

Very interesting article. Thanks so much.

Thank you for this! As an adult, I have personally never purchased Cool Whip as I never enjoyed the taste when my mom used it decades ago. About 15 years ago, I started making my own whipped cream and never looked back! I will stick to that but will try to Coconut one you mentioned here if I'm ever in need of something super quick as a snack and my mixer is on the blink or something. Thanks Lisa!!

Could you also investigate canned whipped creams? In our local store (you have them- Market Basket) I only buy Cabot- the label has a much better list. But when they were out, I read all of the others- Readi whip extra creamy is made with real food, but the regular is not.

HI TO ALL OF YOU WONDERFUL GIRLS & LADIES, IAM SORRY TO BE BEHIND IN MY COMMENTS. I TRIED THE CUPCAKE/STRAWBERRIES

& LET ME TELL YOU IT WAS AN AWESOME HIT W/HUSBAND & FAMILY. I EXPERIMENTED W/YELLOW CAKE MIX, THEN CONFETTI CAKE MIX,

& LEMON CAKE MIX. I PUT A VERY LARGE STRAWBERRY IN THE CUPCAKE PAN FOR EACH. OH BOY, IN MY BATTER I ADDED A TABLE SPOON OF "VANILLA" MY SECRET INGRIEANT IN ALL CAKE MIXES.

YES, WHEN EACH BACH OF CUPCAKES WAS GONE I MAKE THE NEXT, ORDERS ARE IN. THANK YOU SNACK GIRL. YOUR THE BEST & MY FAMILY SHOULD KNOW. LADIES, GIRLS, IT WAS SUCH FUN PLEASE TRY IT? BE SAFE, HAVE A HAPPY DAY, BLESS YOU ALL annneippi

Great post! For readers who are vegan or allergic to coconut and/or real whipped cream, Google the recipe for whipped Garbanzo bean "juice" topping. It's a thing! Best, Kimberly Buchholz, MS, RDN, LD

I'm interested in exactly what people are sensitive to. Eg., I'm lactose intolerant, but I can eat cream. Sodium casienate too. I've never tried frozen whipped topping and it's the kind of thing my family would refuse. I was interested in the comment about extra creamy Ready whip vs regular. I rarely buy that, but I do buy it at times and never read the ingredients. I made an assumption.

I do not use Cool Whip, since I find that it makes me sick. For a topping for fruit; pudding; Jello I like Reddi Whip Extra Creamy in an aerosol can. You will find a can of this my Fridge. It taste more like the real stuff. I also will whip my own

I live alone and have used Cool Whip a lot and it has never bothered me. I have also used the Readi Whip in the can. Real whipped cream is great, but too much trouble for just me. One reason I like the Cool Whip is that it holds up much longer than the other two. Whipped cream and the canned kind deflate really quick.

Hello everyone, Well I stopped using "Cool Whip" so long ago I honestly can't remember how many years? However it has been a struggle in making my summer recipes. Nothing holds as good as CW or stands as firm & is as "Fluffy"

I stopped when I read all the chemicals that were listed. Made me sick. Stopped right then, never went back. Now what? Nothing, I use whipped cream in the can just before serving. Just not the same deflates to quick. no hold.

I will try the above suggested. I have a great summer recipe, no baking, you will lick your fingers refrigerate only. keep the faith, good health, & always be safe, anneippi

Over the years we have used Cool Whip and Reddi Whip. Cool whip for recipes Reddi Whip for topping pies and ice cream. Have loved both. Discoverd Land O Lakes Whipped Light Cream and love it! Only 15 calories per 2 Tbsp and is not as sweet as Reddi Whip. I Don't make desserts as much as I used to so if a recipe calls for Cool Whip I use it.

I used to sit watching tv, shaking a spaghetti sauce jar with a small amount of heavy cream in it. I got this idea from my preschooler years ago making butter in school this way. When it thickened, I ate it right out of the jar with an iced tea spoon. I guess I figured I burned off some calories by shaking the jar, and I had a sugar-free snack. Now that we mentioned it, I think I'll start this again. It doesn't take much cream really.

Cool Whip took out the soybean oil, and, if you buy the Light version, it does not have milk. I don't eat it often, but when I do, that makes it a quick alternative that agrees with my stomach. Yay!

Truwhip has palm kernel oil which is not healthy at all. Whole Foods isn’t around here and I love Cool Whip. But I use canned whipped cream as it has no chemicals. Cool Whip comes in a can but not in my area yet. I really want to try it.

Make your own. Easy and fast

Looking for a whipped cream that low in carbs