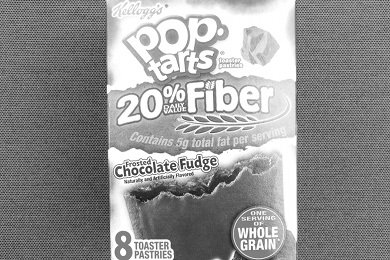 Lately, Snack Girl has been deluged by requests about toaster pastries and frozen waffles. So, I decided to take a walk down the cereal aisle.

On the top shelf were two brands of toaster pastries: Fiber One and the famous Pop-Tarts. Both brands were advertising a 20% daily value of fiber. Could Kelloggs have transformed Pop-Tarts into a healthy choice?

The problem here is that the rest of the ingredients in this chocolate fudge Pop-Tart remain the same. High fructose corn syrup, sugar, dextrose, corn syrup, are just a few of the examples of the sugar added to these pastries.

It is admirable for Kelloggs to want to improve Pop-Tarts. My opinion is that this is lipstick on a pig.

I do like Pop-Tarts, but they should be considered a cookie and NOT breakfast. I can't imagine eating 380 calories (2 Pop-Tarts) and feeling like I had a great start to my day. I would have consumed 28 grams of sugar - 6 teaspoons! - and I am sure I would crash around 10 AM.

I know this is not news, but breakfast is your most important meal of the day. It sets you up to feel good or feel like crap. If you can only make one meal a healthy one - this is the one to choose.

My suggestion is to look for other cereals or frozen pastries that have both fiber and less sugar. Basically, what works for cereal (see: Candy or Breakfast? Evaluate Your Cereal will work for other "cereal like" products.

Use your common sense as well. Do you really think something called "Frosted Chocolate Fudge" is going to be a healthy breakfast?

I know that there isn't a parent out there who doesn't want to give kids what they want. This packaging helps parents to absolve their guilt when their children demand Pop-Tarts. So, give them these improved Pop-Tarts, but as a TREAT not as breakfast.

What do you think of High Fiber Pop-Tarts?

Back in 2010, I started playing with McDonald’s burgers to attempt an illustration of the difference between a homemade burger and one you could purchase at your local chain....

Snack Girl makes frequent visits to her local supermarket to check up on the latest. Guess what I found in the shampoo aisle?....

"Lipstick on a pig"...I like that phrase, and it is definitely fitting here. It's amazing how much junk food makes healthy claims on the packaging.

I SOMETIMES buy the alternative brand Natures Path. It is organic but it only contains 1 gram of fiber per pastry and 19 grams of sugar per pastry, NOT 2! And I'm pretty sure thats not the frosted one as well. Looks like kellogs has 1 advantage only. NO nasty HFCS in this product.

I haven't had poptarts in years, but there one of my favorites! I stay away because of the sugar and calories. It's a shame because there so good!

It's not a good breakfast! Another fitting saying for this would be.... A rose by any other name, is still a rose!

i was super excited last week because i discovered the organic nature's path poptarts and thought maybe my kids will like them. they love them!! and there's no nasty chemicals in them. so i let them eat those for breakfast, and i don't worry too much about the sugar because they're kids, and they'll burn it off, they could do worse. sometimes they have the frozen natures path waffles instead and with the syrup they put on those things they're getting way more sugar then with the poptarts. we're doing way better this year then last year when they ate lucky charms for breakfast every day. now i don't buy cereal that's not organic because of gmos. this i can afford. organic fruits and veggies i cannot so i stick with conventional on those and i think we're eating a lot better then we were a year ago.

I'm with you Lisa. This as to be 1 of my 5 top pet peeves of all time. I see these "healthy" claims on much more than pop tarts. Also, some brands use inlin as a source of extra fiber - Not so good. Inlin can make you bloated and gassy. ;) For anyone who has a smart phone I highly recommend downloading the free app "Fooducate". While grocery shopping simply scan your product and the app will grade it's healthiness on a scale of A+ - F. You'd be surprised at which foods fall in the C category, such as organic granola bars. Boy do I miss my granola bars. ;)

Kellogg's has a huge marketing advantage just by adding fiber to the label. Unfortunately there are a lot of people who are still uneducated over what's "healthy" and what's still bad for you. I stay away from any pre-packaged food as its loaded with HFCS and sugar, like you said. I really wish these companies would stop tricking their consumers.... For example Minute Made Lemonade says "now made with real lemons" and on the back of it, it's actually only make with 3% lemon juice!!! It's technically not false advertising legally, but for health reasons it definitely is! People need to be smarter when buying any kind of product (like reading your blog!)

Why not just make some good quality whole grain toast or waffle(Vans and Kashi are pretty good) with all fruit jam/preservatives and pureed fruit or good quality melted chocolate? It isn't just like a pop tart,but would be a healthier alternative .

But I agree that pop tarts are a delicious treat to have on occasion but I would not call it a nutritionally sound breakfast or even part of one.

I didn't know they made these! But then again, I rarely shop in that aisle. Still, it's just a marketing ploy to get people to think they are eating healthier or "less bad". When we are shopping, we make quick decisions, so seeing this phrase on a box makes people feel better.

I'm 100% with Krissy, Katmood, and Sparkina (LOL at ape-emperor!) and others -- if a food has to make health claims to convince me to eat it, I run away, fast.

As Michael Pollan says in his article "Unhappy Meals"* (and probably elsewhere):

"Once, food was all you could eat, but today there are lots of other edible foodlike substances in the supermarket. These novel products of food science often come in packages festooned with health claims, which brings me to a related rule of thumb: if you’re concerned about your health, you should probably avoid food products that make health claims. Why? Because a health claim on a food product is a good indication that it’s not really food, and food is what you want to eat."

Didn't Bill Cosby do a whole routine on how "Dad is great, give us chocolate cake" for breakfast!? That's what PopTarts are for sure. It's in a DESSERT category for me and if I think of it that way, it's almost never worth it. (I'd rather have real chocolate). Trying to learn I can say no to thing without feeling deprived is my new goal in life. So what if I can't eat PopTarts. Does that really matter? I will convince my inner child the answer is no!

My husband loves pop-tarts, but my kids can take them or leave them. However, when they do want them, I use it as their after-dinner dessert--not as breakfast food or snack food. It's sad how many food companies think labeling things a certain way will make them appear healthy to consumers. It's even sadder that consumers fall for it.

The thing that scares me about this packaging is that people really do fall for it, in droves. Also, hydrogenated oils and TBHQ are a big no way, not even as a snack for me. (TBHQ, or Tertiary Butylhydroquinone, is butane. Yummo.)

I don't think we really have poptarts in the UK here anymore but sugary cereal bars which are sold as 'healthy' to some extent are really popular and often laden with sugar which is going to make you crash later. Like you say, have them but understand they are a bit of a treat.

Hey Lisa -- You brought up toaster waffles. I make waffles most weekends (Alton Brown's recipe, half whole wheat flour) and make a full batch, enough for about five large waffles. My wife figured out that the leftovers can be frozen in toaster-appropriate sections and then reheated in the toaster. I freeze them in plastic baggies, thaw them just enough that the waffle pieces can be separated then pop them in the toaster -- they are surprisingly good. Not exactly health food but at least it's home made. The kids love it.