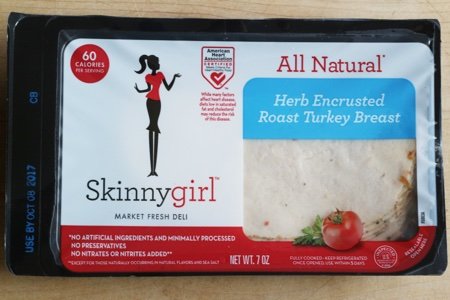 Sliced turkey breast shouldn’t be hard to buy. But, the choices are many. I am frequently amazed when I stand in front of product at the supermarket how many different items there are for purchase.

When I have it together, I make a slow cooker turkey breast and freeze it in chunks for later consumption.

But, most of the time I don’t have it together so I buy sliced turkey breast. It is a great choice for a lean protein and I like it for a quick snack or sandwich.

I found Skinnygirl Herb Encrusted Turkey Breast (photo above) and thought I would give it a try. I have seen the Skinnygirl wines but never turkey. Do you think that Skinnygirl intends them to go together?

What I liked immediately is that it didn’t have any nitrates or nitrites added to the turkey. I think it is best to avoid nitrites in meat as they have been linked with certain cancers. Why risk it if you don’t have to?

Here is the nutritional information for 3 slices (57 grams):

I decided to buy Oscar Mayer Low Sodium Smoked Turkey Breast as a comparison. This brand has sodium nitrite added but it is low sodium. Hint: always buy low sodium if you can find it because it tastes better (also it is better for you). 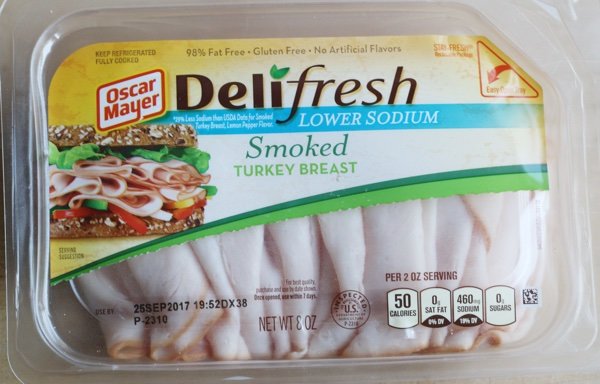 This cost about the same as Skinnygirl but has fewer calories! How strange.

Here are the nutrition facts for 56 grams (almost the same as Skinnygirl):

I don’t know if they calculated it differently. They have almost the same ingredients – turkey breast and a few spices – so it is hard for me to understand how they could be different.

Finally, I decided to take a look at Tofurky. I used to think tofurky was some sort of joke – hahahah – tofuturkey!! But, it is a real product and one that I had never tried before. It is not sold next to the turkey but you can find it next to the tofu. 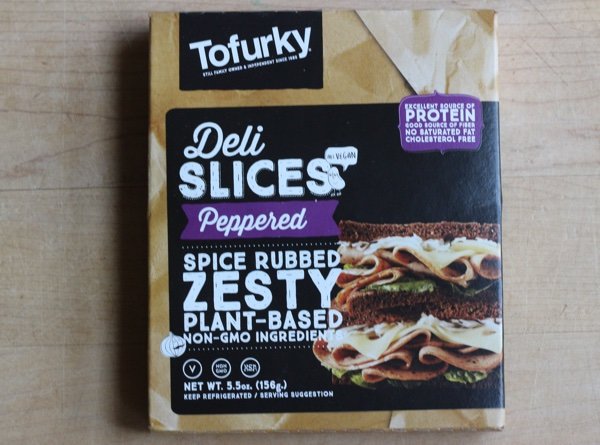 It is expensive. This box set me back $5.50 or and it only has 5 ounces. I decided to buy “peppered” because I happen to like pepper. 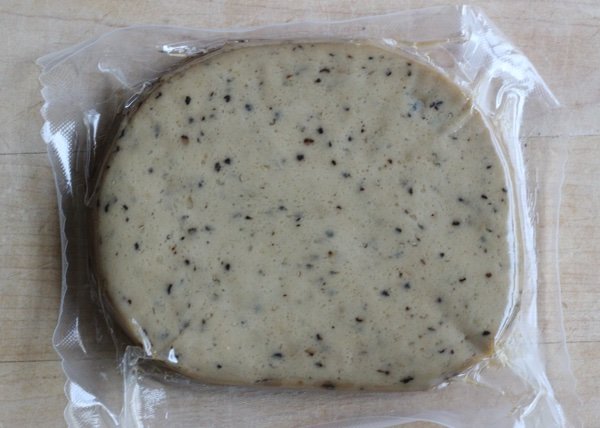 Does this look like turkey to you? Tofurkey is made with vital wheat gluten and tofu so it is not gluten-free. It is nitrite free (duh) and had plenty of pepper added to it.

Here are the nutrition facts for 52 grams (or 5 slices):

The Tofurky has the most calories of the three. Does that surprise you? You would think that tofu would have fewer calories than turkey but I guess that the way they make the product means that it has more – almost twice as much!

I was also surprised that this product had more sodium than the actual turkey. I don’t know very much about fake meats such as tofurky but I would have expected this to be a much healthier option. I think it is probably about the same as turkey breast in terms of relative health. 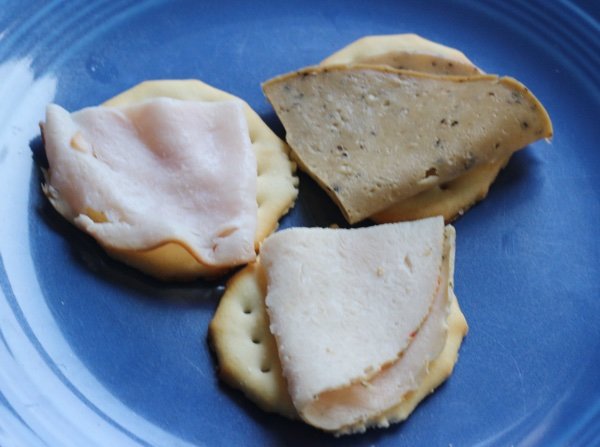 What about taste? I couldn’t really do a blind taste test (unless I was actually blind) because the products look so very different. The slightly pink one is Oscar Mayer and it is that color because they used nitrates and preservatives.

1. Oscar Mayer – the smokiness was quite good as was the texture
2. Skinnygirl – this was pretty bland but would be good with condiments such as avocado
3. Tofurky – I have no idea if this is supposed to taste like turkey but it doesn’t come close. I’m not sure what it tastes like – salty rubber? I think real turkey is much better

If you don’t eat heaps of processed meats (bacon, pepperoni, salami, ham, hot dogs), I don’t think the nitrites are a big deal in the Oscar Mayer turkey. I would buy it for its excellent flavor and not worry about it.

Do you buy turkey breast? What is your favorite brand?

A few weeks ago, I roasted turkey breast and found out that I had done it all wrong.....

I've pretty much stopped eating sandwich meat because of the bad press it's gotten but it really is delicious. I think I'll re-think it due to your post. It doesn't hurt every now and then. I usually eat salads for lunch but need some variety in my diet. Thanks for your post.

I am with you Beth. I will eat it in a pinch but I no longer buy it as well due to nitrates, cancer, etc. I only order it out if it is fresh off the bone.

Hormel Naturals makes a smoked turkey breast with no nitrates, nitrites, or MSG. It has a delicious smoky flavor with no risky additives. I buy it at Wal-Mart. 😊

Interesting comparison. I would definitely love your homemade t-breast waiting in my freezer in single serve packs for an easy add-in to stir-fries or veg soups or a sandwich. For me, I'd rather snack on mostly plant-based items. I use meat almost like a forbidden condiment, i.e., small portion at lunch or dinner [not both] and not daily. One of my favorites is hummus with leftover roasted vegetables on crackers for a snack [or a sandwich at lunch]. It's a habit I've slowly developed in pursuit of a healthier diet, it's far from perfect but if I feel so much better and I maintain my weight. I've even cut way back on cheese, still hard to do. I caught this on FB yesterday and it made me smile. Dr Gregor is so funny and smart: https://nutritionfacts.org/video/dr-gregers-daily-dozen-che…

Wait a minute -- the low sodium product has more sodium than the all-natural one? Geez, it's a mine field out there. My cardiologist recommends really watching my sodium intake, and I'm amazed at how much there is in something that should be healthy, like canned soup. Any good alternatives, or is it 'bark and twigs' the rest of my life?

Great topic! Thank you!
I'm frustrated w/ my lack of losing weight. Dr told me I need more protein. So I've upped my protein yet not enjoying it. I do believe that animal fats and proteins are not the best for me. I wish I could eat a vegetarian life yet at this stage where I need to lose 50 pounds I am always so hungry. I enjoyed the Dr. Gregory articles!

I buy oven roasted turkey breast at Kroger's deli, I think its Private Select brand and its so good wrapped around a pickle spear. My second favorite snack right now is Chef's Cut Smoked Chicken Breast Jerkey, Honey BBQ flavor. I do Weight Watchers and can eat the whole bag for 4 smartpoints. Its YUMMY and nitrate free (gluten free too) but it packs 310 mg of sodium per serving (2 1/2 in the bag).

My favorite is Boarshead No Salt Added Oven Roasted Turkey Breast. This is a different product than the lower sodium turkey breast.

It tastes like real turkey, especially if you have it cut thick (I ask that the slicer be set on #2 setting)

We used to use Boar's Head and were big fans, but then we saw a post on here (Thank you Snack Girl!) about how to make your own and there was a comment about the turkey at Costco. Well, we tried it and fell in love! We use the Kirkland Signature Honey Roasted Turkey Breast and there are no chemicals or preservatives used and it is 98% fat free.
Here are the ingredients: Turkey Breast, Water, Honey, Sugar, Contains 2% or less of salt, rice flour, cultured celery juice, lemon juice concentrate.
It is $6.99 a pound, which is much less than what we were paying for BH. A no brainer if you ask me. We purchase this and divide it up and freeze it for weekly lunches. Goes nice on whole wheat sprouted bread with a little light mayo and some arugula!
There is also a plain version for a little less $$, but you have to buy the whole boneless turkey and slice it up yourself. That one is also good!

I noticed that some of the Oscar Mayer turkey breast has "caramel color added for color" or something like that. I don't think the one you have above uses it though. But, I thought that caramel color, which is used sodas, is bad for you and try to avoid it.

I usually buy Boars Head turkey breast. However, when I don't want to wait in the deli line, I buy Oscar Meyer Mesquite Turkey Breast. The mesquite turkey breast does not have nitrites. Some of their other deli meats also do not include nitrites. You have to check the front of the package. I think these new nitrite free deli meats just came out a few months ago.

Lisa, I laughed out loud at your 'salty rubber comment. Hmmmmmm, maybe if it was deep fried??