Eat Less Meat And Dairy With These Vegan Snacks 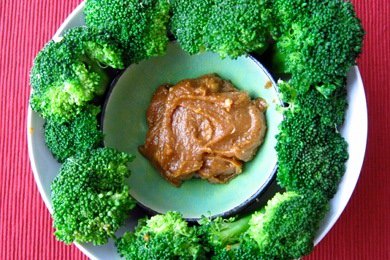 Snack Girl remembers the day when she met her first vegan - and she thought, "What is WRONG with you?".

The concept of life without cheese was just too much for Snack Girl. Since then, Oprah has attempted a vegan lifestyle for a whole week!

What is a vegan? A dietary vegan does not eat ANY animal products. That means no meat, eggs, milk, cheese, honey (made by animals!), and fish, etc.

Frankly, this diet would make me sad because I love so many of these foods. On the other hand, moving to a more vegan diet seems like a good thing.

Why? A few reasons:

Fruits and vegetables are not as calorie dense as meat and have more fiber. It seems that if you cut down on your meat eating, and up your fruits and veggie consumption you will be effecting your health and the planet in one stroke!

Personally, I have been moving toward a TOTAL meat consumption of 4 ounces per day. Ever since I read that the average African eats 0.5 ounces of meat per day, I have tried to cut down my portion sizes.

When I serve chicken, steak, or fish on my plate, my portion looks about the size of my American Express Gold Card (which I like to take out and admire as I measure out my portion :).

Americans put away 176 pounds of meat a year (compared to 66 pounds per year in developing countries)! That is about 8 ounces a day - and so I am probably trying to cut my personal meat consumption in half.

And, I have been buying organic meat products whenever possible and just eating LESS. Organic is less terrible for the environment - but it still doesn't answer the problem of whether eating meat is sustainable.

At any rate, here on Snack Girl - I support eating less meat and more fruits and vegetables. You can find an AWESOME list of vegan snacks here:

and every time I list a new one - I will tag it with the term: Vegan - so the list will ever expand into the universe of snackiness.

Have you been moving toward a vegan diet? Please share.

Want to read about snacks?
A Grab 'N Go Breakfast With ZERO Added Sugar (and you will love it)
You Won't Miss The Butter In This Holiday Banana Bread
A New Meaning For The Word "Grass"
Suppress Your Appetite Without Drugs

I could never go completely vegan, but it might be fun to try to do it for a week or so like Oprah did. It's always fun to try new foods and it would be a good way to get introduced to all sorts of veggies that we normally overlook.

I would like to try vegan too, but I just don't think I can give up eggs & cheese. And eating out anywhere is impossible! Those delicious green beans were cooked with some ham and everything has chicken in it!

i was vegan for a long time, worked at a fine-dining vegan restaurant, & taught vegan cooking classes! but ... i LOVE sushi and so every few months i would "fall off the wagon" & totally binge for a week or so on sashimi! i realized that i would eat less meat if i just ate it in moderation.
now, i follow a plan similar to your (high quality, low quantity with no more than 6-8 oz per day). i do, however, eat a lot of eggs and greek yogurt. i feel so much better now that i've upped my protein content!!!

My husband follows the engine 2 diet and has been vegan almost 2 years now. The rest of our family has cut way back on all meat sources as a result. I am amazed at how delicious all the vegan recipes I make are. Seriously, the desserts are so good, you would not know which are vegan and which are not.

I am not vegan, but have no problem with those who choose that lifestyle. And it is wonderful to expand horizons.. some of these foods are delicious! However, it is also important to note that those with a vegan lifestyle must make sure to include enough protein, iron, calcium, etc in their diets to make up for some of the important stuff that is included in an omnivorous diet. Awesome website... I look forward to getting these emails every day!

Gotta be honest. I've never even considered going vegan. But I do like the idea of actively trying to reduce the amount of meat that I eat.

I have been vegan for almost a year now and I absolutely love it! Prior to that I hadn't eaten red meat in over 20 years so the transition was a pretty smooth one. I had no choice as Poultry (even Organic) started making me sick to my stomach so I had to let it go. Clean eating is a lifestyle choice that HAD to be made for me and it just so happens that I LOVE it and couldn't imagine going back to the way I felt when consuming poultry and dairy! It's not for everyone though!!!!! I'd recomend really, really researching this lifestyle before jumping on board! Here's to your health!!!

It's worth mentioning here that the average american house cat eats more meat per year than the people living in deforested rainforest areas - which is where a huge portion of US meat comes from, especially the cheap meat used in fast food.

Ooh - ooh - and also, pound for pound, broccoli has MORE PROTEIN than beef! How many people do you think know that one?

I'm not a vegan, but can 100% life a vegan lifestyle! I still eat cheese and honey, but meat is about the last thing on my plate. Even though vegan and gluten free lifestyle may be healthy, remember though, that if there's a box of cookies labeled 'vegan' don't think that eating the whole box it healthy or won't do anything to your waistline!

The best thing I ever heard was that "We should use meat simply as a condiment." Ever since I heard that and read Mark Bittman's book, Food Matters, I have worked towards reducing my meat consumption for both health and earth preservation. Love this post!

I've been Vegan-ish for several months. I don't eat meat, cheese, eggs or dairy on their own (but I know they exist in things like bread and desserts and I don't actively avoid those things) I have tried to substitute more vegetables and plant based proteins in my diet since November. It's an amazing feeling to eat "cleaner". My skin is prettier, I have better hair days and my "happy weight" is about 10 pounds less than it used to be.

I've been a vegetarian/vegan for the past two years now and it really hasn't been too hard to give up eating meat. I remind myself that most Hindus and Buddhists are vegan and they seem to be doing just fine health wise. Also humans are the only animal that consumes another animal's milk and a good amount of people end up becoming lactose intolerant as they get older anyways. Plus it's hard to justify eating another animal, especially once you've seen the way they are inhumanely treated. I don't so much have an issue with using excess milk or eggs that would just go bad anyways, but factory farming cows for their milk and chickens for their eggs seems a bit unethical the way we do it now.

I am not vegan but i totally respect anyone who is. We have managed to at least lower our meat consumption (only once a day about 4-5oz and usually chicken breast). The chicken i do buy is vegetable fed and can be traced to what farm it came from. Looking on the comparison of that to other main brands it has less fat and considerable less sodium. For that i find the minor price difference worth it.

I'm glad so many others are contemplating a vegan lifestyle, or at least a vegan diet. Everything Sanck Girl has written here is true, and more! Watch these two documentaries online for free: