A Healthy Substitute for Cool Whip 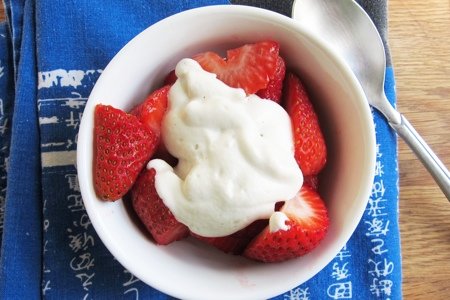 Snack Girl doesn’t know how many of you eat Cool Whip, but I know most of you love the idea of whipped cream on strawberries. Yum!

Cool Whip is one of those amazing inventions that allows the consumer to save time by not having to whip cream. The downside is that Cool Whips isn’t whipped cream in a bucket but a mix of sugar, wax, and condom lube as the linked article so elegantly states.

You can do better! The vegans in the house know what I am talking about. Their substitute for dairy whipped cream is called “cashew cream” and is stable in the refrigerator. Yes, you can grab a dollop for your dessert and avoid condom lube.

After soaking the cashews overnight to make them soft enough to blend, you use a blender to puree them into cream. It takes my $50 blender about five minutes at the highest speed to get a very smooth consistency. Do not give up!

As for the sweetness, I found that one tablespoon of agave nectar was enough for a nice flavor. I used agave nectar because it doesn’t have a strong flavor (like honey or maple syrup).

Cashew cream is not low in calories versus whipped cream, but it has no cholesterol and it is very high in magnesium.

Have you tried cashew cream?

Soak cashews in a container overnight in the refrigerator. After soaking for 12-24 hours, blend the cashews, water, agave nectar, and vanilla until very smooth.

Serve immediately on top of berries or store in the refrigerator for 4 days.

Ice Cream Cravings Making You Crazy? Give This Healthier Dessert A Try

Snack Girl is ALWAYS looking for ways to makeover treats into healthy food. And, she loves banana splits!....

What Happens When You Remove Fat And Sugar From Ice Cream

Does anyone else think the image of a skinny cow is a little strange? My kids thought the packaging was hilarious....

I love the idea. I have to try this! I love cool whip, but your right it's made of crap thats not real. I just saw it on this 19 top foods not to eat!

Thanks for the recipe! I've been on a cashew kick recently. What a fun way to serve those yummy nuts!

Great tip - thank you! After going "mostly" vegan a couple of years ago, I've found we have lots to learn from the vegan community about healthy ways to prepare delicious food.

Marcy you make the right choice. Almond is one of two nuts that has absolutely no cholesterol and provides all the nutrients necessary for our body. Aside this, if you eat a handful of almond your skin will be silky.

Always eat fruits with no whips to be very healthy.

I've gotten used to using some Greek-style yogurt instead of whipped cream (Cool Whip freaks me out lol) and I find I don't miss it! Yogurt + Nutella + chopped peanuts = best dessert ever!

No nuts contain cholesterol. Only animal products do.

I love my cool whip - but I truly almost gagged when I read the description in the article :-) LOL

What about Reddi-Whip? That's real cream right? It looks like it does have corn syrup in it but no wax or lube...

Great recipe. What can you substitute for cool whip in recipes. I don't eat cool whip, except on the rare occasion of using in a recipe.

We ended up getting one of those fancy whipped cream things that professional chefs use (it was my husband's idea). The kind that take the cartridges. Anyway, that works well for us since we just put our favorite organic cream in. Once the cream is in the canister it will last up to one month (so a little goes a long way).

In my diet/good-choice food group, we have a standing joke that Cool Whip is polyester in edible form!

I wonder if there is another way of making this without cashews.My son loves whip cream. As I have gotten older I am finding out I am sensitive to most nuts in the nut family :(

hi lisa!can you answer this question??
icecreams have a high fat content but when we put icecream in bowl it doesn't leave our bowl greasy...WHY???

I prefer my Reddi Whip

I hate to admit, but I expected this recipe to be anything but healthy. I'm so glad I was wrong. Other than the agave (I'd use raw organic honey, Grade B maple syrup, or experiment with coconut crystals, etc.), this is actually quite healthy and quite doable. Great substitute for the unhealthy and often unreal whipped dairy options. Cashews are rich in many nutrients and includes quality fat that our bodies need to stay healthy.

Are the cashews raw?

I can not eat cashews,is there another nut that can be used? I have at home right now almonds, walnuts and hazelnuts.

Nuts, like almonds, hazel nuts, Brazil nuts, walnuts and cashews can all play a role in reducing the risk of heart disease, according to a Harvard review. That's because nuts may help reduce LDL cholesterol (more on that later), and incorporate a dose of heart-healthy monounsaturated and polyunsaturated fat and fiber, which has a heart-protective effect. Nuts are also rich in arginine, an amino acid that converts to nitric oxide in the body and helps blood vessels to relax.

Try throwing greek yogurt in a blender for a few whirls to make it frothy, too. Not vegan but delicious, nonetheless.