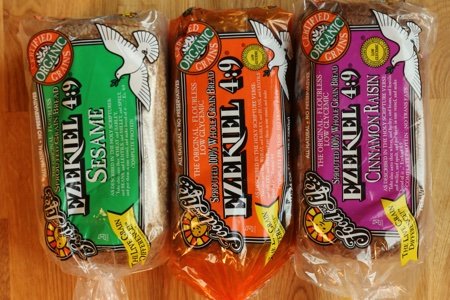 It is hard not to like a bread that is inspired by a book since I love to read.

Which book? It isn’t a cookbook or a romance novel.

Ezekiel is acknowledged as a Hebrew prophet and he included a recipe for bread in his "Book of Ezekiel" in the Bible (a bestseller). This is the quote from the front of the label:

“Take also unto thee WHEAT and BARLEY, and BEANS, and LENTILS, and MILLET, and SPELT, and put them in one vessel, and make bread of it...” Ez. 4:9

I wrote an Ezekiel bread review in 2012 and not much has changed. It is amazing bread!

I have also written a Dave’s Killer Bread review and I must say I like Ezekiel’s more because of the smaller slice of bread. One slice of Dave’s is 120 calories and I would rather have an 80 calorie slices (especially when making a sandwich).

Doesn't that sound like an amazing bread? lentils - wow!

Nutrition information for one slice:

Check out this slice: 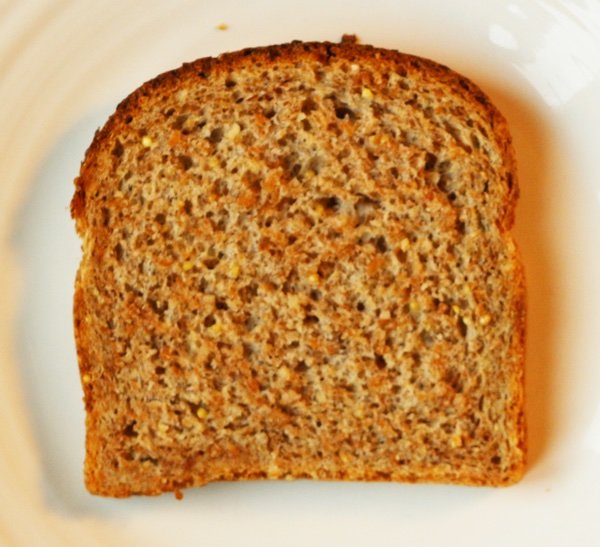 As you can see, it looks like there are little nuts in the bread. Those are the sprouted grains. Instead of milled flour that is ground up, Food For Life sprouts the wheat berries to use them in the bread. The result is incredibly nutritious (and less processed).

It does take some getting used to if you eat regular wheat bread. The consistency is a multigrain but with even more chewy areas.

I love the cinnamon raisin as it has only 5 grams of sugar per slice (all from the raisins) and tastes like I am having a treat. You really don’t need added sugar in a slice of raisin bread since raisins are so sweet.

I eat my Ezekiel bread spread with peanut butter, avocado, or in a tuna sandwich – yum! The sesame flavor is excellent as well.

Where to buy Ezekiel Bread? I found mine at Trader Joe’s. Use Ezekiel bread’s Store Locator to find a location near you. It costs about $4.50 for a 1 ½ pound loaf. I store mine in the freezer because it contains no preservatives and will mold quickly.

The Best Packaged Bread You Can Buy

I am always looking for a loaf of bread that I can recommend without a doubt. Ezekiel bread is one of those breads....

FYI, Dave's Killer Bread comes in thin-sliced for only 60 calories a slice. It feels like a treat to have two slices for only 120 calories! I like Ezekiel too but don't like the extra calories when I can get Dave's.

I find Ezekiel bread to be very very dry. If I do eat it, I need to put a spread like avocado or something with a wetter texture (like your tuna), otherwise it's unappealing. I enjoy the Dave's bread a little bit more, but I do love the simple, healthy ingredients in the Ezekiel bread.

We have Ezekiel Bread at Safeway here in Tacoma and it's found in the freezer section.

I like Dave's killer bread a lot. When toasted it is simply divine !
Since the slice is fairly large I use only one to make a sandwich - cut in half .

I have had Ezekiel bread and do think it is good. I haven't had the Dave's Killer bread but I do want to try it. I will look for the thin sliced one though.

I've tried Dave's Killer Bread, thin sliced, and it's pretty good. If you compare the weight (grams), it's close to Ezekiel. Both are healthy, so I guess it depends on what taste one prefers. I love Trader Joe's low carb whole wheat tortillas with peanut or almond butter. It makes a very satisfying breakfast.

I really like Ezekiel bread. The first time I tried to find it I looked all over the bread isle. Its not there! It is in the freezer section. It is at Kroger's in the organic freezer. Publix has it in the bread section of their freezers. I like the "Flax" bread the best. You can not beat the Cinnamon Raisin bread if you are craving something sweet.

Here in MD we have it in the freezer section at BJ's. I also prefer Daves Killer Bread although if given a choice Rye or Pumpernickel are my favs!

I buy the Ezekiel Low Sodium Bread, found in the freezer section of my local Giant in Philadelphia. It is actually zero sodium, not just low. Both my husband and I take blood pressure meds, and other breads are a significant source of sodium, so this is a good choice.

I've been using Ezekiel low sodium bread for years. I'm very sensitive to sodium and love it. I keep it frozen leaving out just enough that I will use in a few days. I get mine at local Publix store (FL), Lucky Market or Whole Foods.

Never heard of the Dave's Killer bread. Will have to look for it.

I find the Ezekiel bread very, very dry as well, plus my family would not eat it. We discovered Daves Killer Bread earlier this year, WOW, we all love it. We prefer DKB - Good Seed as it has a higher protein and fiber content, but we have eaten all of them. Love it toasted with avacado. I also make half sandwiches since the calorie count is higher. They have now come out with bagels as well. Has anyone tried them?

Sorry if this is a dumb question- if a bread is made of sprouted wheat does it have less gluten? T.J.'s has a flourless sprouted wheat loaf that is very tasty and I have always felt it was superior health wise because it is so coarse and natural. Thnx, Kay

Silver Hills Mack's Flax sprouted bread is awesome! Especially toasted. I like it better than Ezekiel.

@Kay D - Ezekiel adds gluten to their bread. I think it would be less than regular bread but I am not sure. Sorry about that. Thanks for your question!

I'm very sensitive to sodium and love has only 5 grams of sugar per slice
we have eaten all of them. Love it toasted

Ezekiel breads are delicious, no doubt about that. But I can't eat any of it without getting a bout of hiccups. I can eat whole wheat breads off the grocery shelf, such as my favorite, Oroweat. I can eat all I want of that without hiccups, but not even one slice, toasted or untoasted of any Ezekiel bread.

Well would like to say the Ezekiel bread is my favorite. I find it at Sprouts in the fridge but not frozen. So I guess it's not real dried out from the freezer. And when I get home I stick the bread in the fridge not the freezer and take out slices I'm going to use and toast them lightly and put light Land/Lakes (green top)butter and some Apple Butter YUMMM....