Can You Make This A Habit? 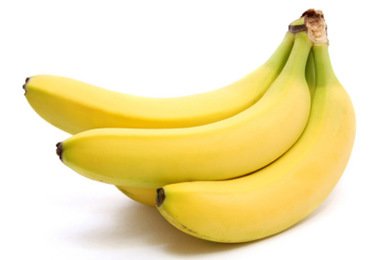 Snack Girl loves bananas. Some would say she is bananas for bananas.

Yesterday, I picked my 9 year old daughter up from camp. We had to go to Target to pick up some pajamas because she is growing so fast.

As we entered Target, she looked at me with her big blue eyes and said, “Mommy, I’m hungry.”

Ummmm, I am Snack Girl, right? Wouldn’t it be obvious that I would bring along an after camp snack? She hasn’t eaten since lunch and she was running around all afternoon. Whooops.

I took a long hard look at Target. Near the entrance is a Pizza Hut, popcorn, and ICEE eatery. Noooo. Then, I remembered that they had started to sell fresh food down next to the shampoo. Hurray! But, would my daughter who could see the candy, sugary granola bars, and ICEE go for it?

“Honey, they sell bananas here. Would you like a banana?”

We strolled past all the junk (and there is a lot of junk) and bought a 24 cent banana, which she proceeded to eat in the eatery.

Honestly, she blew my mind. I thought she was going to give me a fight because she likes junk food like any other kid her age. At home, we don’t eat it but when we are out and about we do pick up treats.

Her habit is to eat fresh fruit for a snack so she stuck to it EVEN in Target. I am a very proud mama.

My conclusion is that when you are in the habit of eating fresh food, junk food doesn’t taste as good. You start to WANT fresh food and the other stuff fades to black. It isn’t easy to stop eating the Snickers and drinking Cokes, but if you stick to eating healthy you won't be tempted.

Many of the stores that sell crap also sell fresh food. It used to be different, but now you CAN find a banana in Target, at the gas station, and in convenience stores.

How do you deal with snack time when out of your home?

Snack Girl has read only a few books in her life that have made a lasting impact on what she eats....

You Are Stuck In An Airport: What Are You Gonna Eat?

Snack Girl used to travel much more when she was cool. Now that she is boring, she flies maybe once a year....

In our house, snack time habit is always fruit, yogurt or cheese. They never asked for chips or junk, mainly because I just don't have it. I say no to a lot of junk food requests, but I never say no to fruit and they know that...even before dinner!

I usually try to take something with me. With trying to make healthy choices as well as drink water, my motto is if you don't have it with you and can't eat it or drink it!
As a public health dental hygienist, I see alot of tooth decay in children beacuse of a diet high in sugar and junk food. Like you Snack Girl, if you act as excited about a banana in front of your kids and that's their "treat" then they learn and think that a banana is a treat and make those healthy choices just like your little girl did! That is one of my messages to parents that I meet. Way to go!!!

I love this post! I am a dietitian working in an Ob clinic. Our population includes many overweight/obese women. I have healthy snacks available, as our patients often spend a long time here. Recently I offered a snack to one of our larger patients. She chose the applesauce. I told her it is unsweetened, and that was okay with her. She took one taste and rejected it. I offered her a packet of Splenda. She tried this, but then tossed it in the trash:(

I eat two bananas per day for roughly 900mg potassium. They're not the most favorable from a glycemic index standpoint but in my opinion, they are magical for the nutrition jigsaw puzzle.

Instead of spending money on a bag of Doritos or other chips I would rather spend my money on a fresh pineapple or strawberries. I go to the grocery store at least twice a week and you would think I have monkeys at my house for all the bananas I buy.

Good for you & your daughter!!! (and Target!) Dunkin Donuts now sells bananas too... And, this use to be a 2pt food on WW, but is now free like all other fresh fruits.

I try to keep a bowl of fruit out on the counter, so it is top of mind... thanks for the tips!

OMG - the timing of this post is too funny! I'm at work and I JUST asked my colleague if she thinks that my somewhat brown banana would still be OK to eat! I had not seen this before I asked the question! Oh - she said yes of course I can still eat it and I will! As for eats when out and about, I always have something with me - trail mix that I make myself or a protein bar or an apple and a Baby Bell cheese - stuff that travels well. And if I happen to not have anything and hunger strikes, then I'll search for stores that sell healthy things - so many more do these days as many other people have pointed out.

Go, SnackDaughter! That is awesome. :)

I've done that with my 4 year old at Target too. She loves bananas and when we're there, she wants to snack on one.

Don't forget that too ripe bananas freeze well, so don't toss them! Just peel and stick into a ziplock Baggie. I use the frozen ones in smoothies, and the pancake made with mashed banana, oatmeal, egg white, and slivered almonds and blueberries.

We love bananas but as diabetics we have to make other choices in fruit because of the high sugar. It is too bad because they are so delicious alone or with many other foods. One cup has 51 grams of carbohydrates, 33% Vit C, over 800mg of potassium and 28 grams of sugar. These are great for an energy pick me up in mid day and really healthy snack for those who can safely eat them.

Love them in smoothies.

Reading posts like this warms my soul! I just love the idea of you and your daughter sitting down in the eating area of Target to enjoy a banana snack. I love bananas and begin each day with 1/2 a banana, sliced and spread with a little peanut butter.

One of the first healthy habits that was discussed with the launch of the WW 360 program in December was to always "Pack a Snack." So now in my bag at all times you will find a little tin of nuts and Luna Fiber bar for emergencies.

I like baby carrots to nosh on while cooking if I am really hungry. I like popcorn (homemade) as a snack too. Now bananas how can you not eat one! I am amazed when I meet folks who don't like them!

This post isn't really about bananas. It's about choosing "real" food over "goop". The best thing for a household to do is stock only nutritious foods on a routine basis and save the candy and cookies and doughnuts for parties, company, holidays, birthdays and other special occasions. There is a difference between a cupcake once in a while at a birthday party and a cupcake every day or -- even every week -- as part of an ordinary school lunch. That way, young people will understand that there are foods you live on and foods that are treats. If you stock nutritious foods in your house, that's what your children will gravitate toward and will even ask for outside the home. Bravo, Snack Girl!

Oh, bravo to Kim, too, for not having junk food in the house. If your kids learn to like real food, Pop-Tarts and Froot Loops won't seem so tempting

I heard at my WW meeting a week ago that we say "No" to junk one time in the grocery store but that we have to say "No" many, many times if we take it home. :) Good job teaching your daughter how to care for herself.

Love me some bananas as well :) I usually have one right before I workout, helps give me that extra kick of energy. I've started calorie counting and noticed that bananas take a chunk out of my (healthy) snacking options so I'm mixing things up by substituting it with other fruits. Nuts are another crazy culprit. I'm very glad to have found your website though, thanks for providing healthy snacking options!

I just love it when kids accept healthier options and I respect that you went out of your way and didn't give in. I would like to practice this with my niece. My cousin (who is a teenager now) snacked on broccoli and carrots even when they had Oreos in the pantry (though she snacked on those willingly as well :)

Oh Snack Girl I just love your message ! It really is all about habits! Healthy eating habits! It is a choice that we have teach ourselves and our children and who ever else is in our sphere of influence ! Snack DOES NOT have to mean fat , yucky, regrettable . Snack can mean yummy , delicious , wholesome ......bananas at Target!!!

I am an Arbonne Consultant and all about being healthy inside, so it radiates outside. Looking forward to reading more blogs from you Snack Girl!