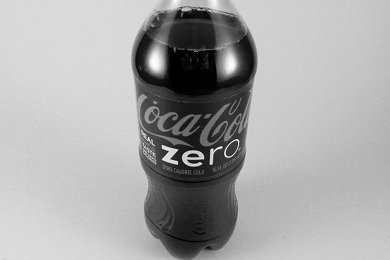 I had this friend in high school who would have a cigarette and a Diet Coke for lunch. She always seemed to have a can of it in her hand.

Her behavior mystified me because I thought that both the cigarette and the Diet Coke tasted awful. Many years later in graduate school, I faced a set of vending machines every time I wanted a break from my challenging studies. That is when I decided that I not only liked Diet Coke - I LOVED Diet Coke.

Here it was, a treat without any of the calorific consequences of the Snickers bar - Hurray! I started drinking 2-3 cans per day.

I had formed a “Diet Coke Habit” just like my pal in high school. I really didn’t see anything wrong with it. Lately, there have been some studies that say that artificial sweeteners can lead to weight gain see: Three Reasons to Rethink that Diet Coke You’re About to Drink.

For those who don’t want to get pregnant to end their habit, I have some much better suggestions.

I did find that after a year of not drinking Diet Coke, I no longer liked the taste. Diet Coke was something that I had gotten accustomed to, like holes in my socks that I should throw out.

Just buy new socks and drink something that tastes better.

How do you deal with your soda or Diet Coke addiction?

Snack Girl receives a small percentage of sales from links to Amazon.com.

Some people love water and others wish it was more flavorful. I am in the "love water" camp, but many of my readers are not....

How Shawn Stopped Drinking 10 Cans of Dr. Pepper per Day

Ten cans of Dr. Pepper is a whopping 1500 calories and the equivalent of drinking 24 ounces of coffee in caffeine. Shawn used to drink this almost EVERY day....

I allow myself one can a day. I usually have it with lunch and that's the only one I get all day. Otherwise I drink water etc.

I used to drink a few diet cokes a day. When I started Weight Watchers, I stopped drinking it during the week and I allow myself to have one on weigh-in day, and I drink it if I am on vacation. All other times I drink water and hot tea.

Some years back I wanted to stop with the artificial sweeteners as well, so I cut out all soda and started drinking carbonated water. No sodium or sugar but a nice taste. No more soda at all!

I think Diet Coke has ingredients that are addictive. It doesn't taste particularly good but I drink it anyway. I try to only drink it occasionally.

I read in a book to think about what it is I am actually craving so when I want the soda, I figured out it was the carbonation I really wanted and started drinking seltzer that way. Love to get a fresh line to squeeze in like at restaurants. I find the glass bottles taste better than the plastic ones too.

We don't drink soda in our house at all. There may be some occasion where I let the kids have a sprite or some other soda that is not caramel colored. Other then that not at all. Especially after I learned how they make caramel coloring...ammonia treated sugar. MMMMM

I decided to give up diet coke (all soda) in March of this year and just quit, cold turkey! I don't miss them at all now but the first time that I had pizza without a diet coke was hard! I have 2 small cups of coffe in the morning and water or green tea through out the day.

I, too, used to drink a can or two of diet vanilla soda (not the brand you mentioned, but the other big one) a day.

As this wiki entry http://en.wikipedia.org/wiki/Excitotoxicity acknowledges, it may be biased toward certain views, but -- to me -- it sure doesn't seem like a far leap to believe that the manufacturers of no-calorie sweeteners either aren't terribly concerned about its ill effects or, worse, that they know about the ill effects and that diet-drink makers keep using it because it creates an addictive cycle in us unwitting consumers.

While I'm no expert at any of this, I am certain that our species existed for an incredibly looooooooooooong time without any of this kind of garbage and diet drinks just don't align with my general non-garbage dietary approach, so no more diet (or other) sodas for me.

I primarily drink water these days, but when I'm feeling frisky, I'll stick a hibiscus tea bag in a bottle (http://www.amazon.com/Ello-PURE-Bottle-Silicone-Sleeve/dp/B… $10 from the big red discount store), fill it up with (distilled) water, and refrigerate the assembly for 12-24 hours. I then remove the tea bag, sweeten it with a little honey, shake it up, and enjoy. I imagine I'll be making and enjoying more hot herbal tea as winter rolls in.

Interesting, I just had this conversation with a nutritionist who gave me this explanation: "Carbonation is theorized to actually bind to fat cells. This causes a slowing down of fat loss, thus making it much more difficult to lose weight. Furthermore, when you ingest a carbonated drink you are essentially ingesting air. It may taste tingly, but by ingesting air you bloat the gastrointestinal tract. This causes a slow down of digestion, which is another important factor in weight loss." After hearing this, I'm ditching the carbonated water also.

Why do you need a soda maker for this? We just mix Pelligrino with juice,

I did a blog post back in August on this very subject with how I was able to quit the soda addiction!
http://tinyurl.com/8mkumxv

I have never had a diet coke habit (regular yes, and I recently stopped because it was giving me acid reflux). However, my mom did have the diet coke addiction. She was developing symptoms similar to MS. On the advice of a friend in the medical profession, she researched and found that aspartame has been proven to cause these symptoms. She stopped the habit and her symptoms went away.

I was never a big soda drinker anyway. One glass with dinner at night. That's it. So when I decided maybe Coke Zero isn't a good idea anymore, I switched to diet ice tea. No problem. Doesn't flat and lasts longer too.
If I want something bubbly, it's flavored sparkling water. There are so many great flavors to choose from nowadays :)
Great post, as usual.

I am trying to cut down on my consumption of diet coke as well. I am more concerned with the acidity of it and the effect it will have on my teeth. I have switched ( and reduced from 2 a day to about 3 a week) to diet root beer as it is 3 or 4 times less acidic than diet cola and try to substitute iced water with cucumber in it. I am wondering if carbonated water would effect your teeth as well.

Thanks for the article! I switched from Coke Zero to Sprite Zero/Diet 7 UP/Diet Gingerale to reduce my caffeine intake while trying to get pregnant. But I also have read/heard that the artificial sweetners/carbonation can be just as bad. I have yet to find a way to kick Sprite Zero and I have 1-2 a day. Any suggestions?

I only have one can of diet soda per week - it is my treat over the weekend. But, I tried seltzer, and it tasted so bad I dumped it down the drain. Seriously, how does anyone drink that stuff? I just drink plain water.

I use to be a big soda drinker. I stopped when I had chemo. All I could taste was aluminum can. It was aweful. Even 6 yrs later I have found that I assosicate soda with aluminum cans and dislike the taste. Even soda from a fountain. I highly recommend not going the chemo route to quit drinking soda but it did work for me.

I was never really into soda, but I would have one a couple times of month as a treat. I quit cold over 3 years ago, for no other reason that I knew it was bad for you.
I read something once, that if you have even 1 soda every day, and you cut it out completely, you can lose about 20 pounds in 1 year without doing a single other thing.

I still have the occasional diet soda but have moved on to seltzer water with a squirt of lemon juice.

Another benefit of the sodastream is no recycling, bottles are reusable. We bought ours and i was skeptical but now love it. We sometimes add a shot ofdifferent torani syrups, at least you control the amt. i am diet coke and try to be art. Sweetner free since last fall.