This chicken fajita recipe is made in the slow cooker. I know it would be more fun if it was sizzling in a pan but I don’t always have time for that. 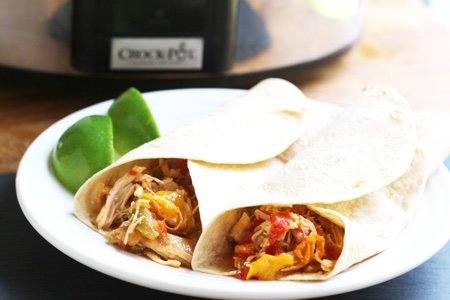 Have you ever been to a restaurant where they show up with a sizzling pan of fajitas? Oh man, the whole restaurant looks up because it smells sooo good. Fajitas are usually a healthier choice because they are grilled and lack the ubiquitous pound of cheese that shows up on enchiladas.

The slow cooker is an excellent tool for cooking chicken breast because it seals in moisture. I love the results with my slow cooker honey garlic chicken recipe and slow cooker roast chicken. You don’t have to worry about it drying out! 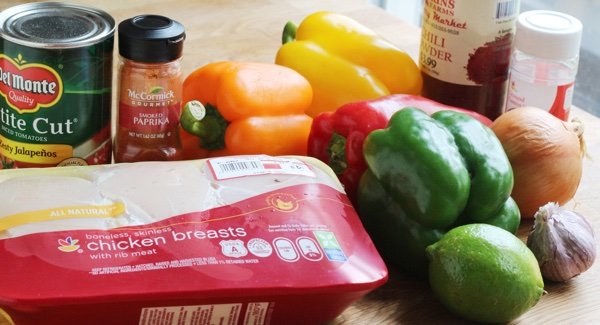 This recipe takes a little more preparation because you slice up peppers and an onion. I used my food processor to make quick work of this.

The first step is to layer ½ can of diced tomatoes with chilis (I used ones that had jalapenos) and ½ of the peppers, onions and all of the garlic. 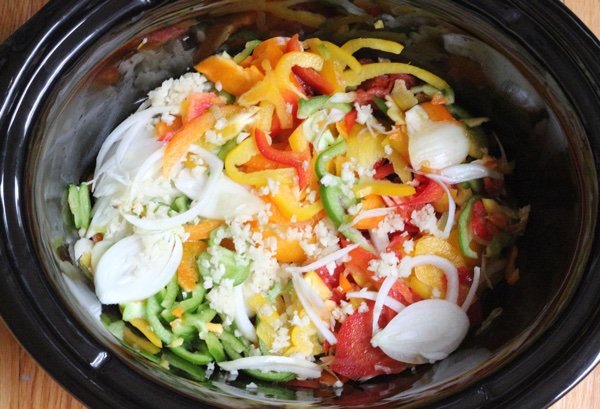 Then you add the chicken breast and spices, 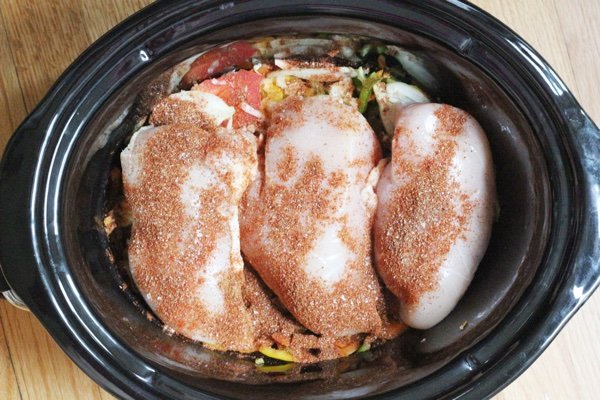 Finally you addand another layer of tomatoes, peppers, and onion. You make a chicken “sandwich” and turn on your slow cooker for 6-8 hours on low or 3-4 hours on high.

What happens is that the chicken is covered and remains moist through out the process and is infused with flavor. This is extremely low in fat (chicken breast is very low in fat) and you wouldn’t know it.

I like to serve this in a tortilla or on top of lettuce (taco salad anyone?).

It isn’t as crunchy as actual fajitas – the slow cooker turns it into somewhat of a stew – BUT it is very tasty.

You can hit it with some fresh lime juice and a dash of hot sauce for extra flavor. 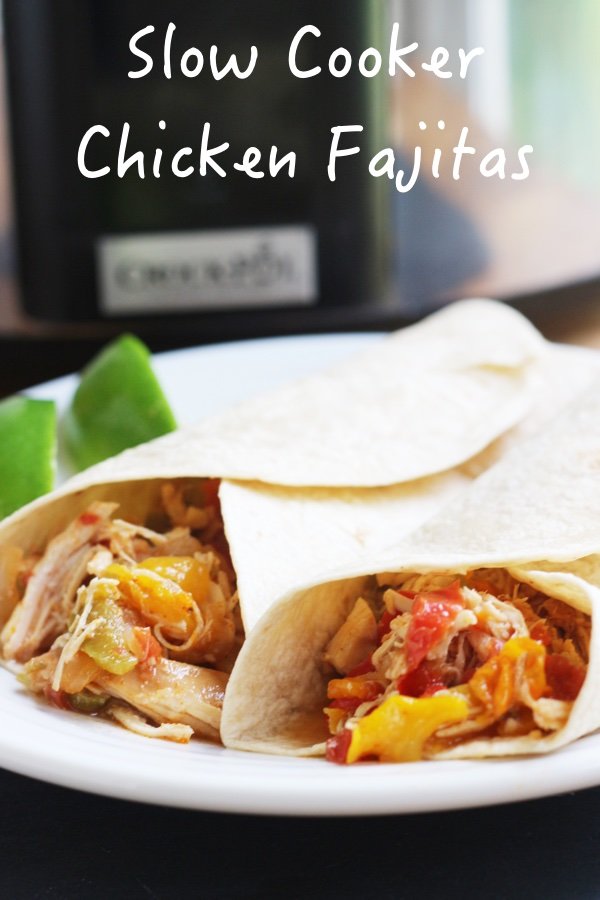 Pour ½ of diced tomatoes into a 6 quart slow cooker. Slice the peppers and onion very thinly using a food processor or sharp knife. Add ½ the peppers and onion to the slow cooker. Add the garlic and then layer the chicken on top. Mix chili powder, cumin, paprika, salt, and pepper in a small bowl and toss onto chicken. Add the rest of the tomatoes, peppers, and onion and cook on high for 3-4 hours or low from 6-8 hours. Serve on tortillas with lime wedges.

Take-out can be a scary thing. You have no idea how much oil was used to cook your food. Yikes!...

There seem to be a never-ending source of recipes that use “cooked chicken”....

Husband won't eat this without cheese. How about a low-fat option! What flavor would be tasty?

Madeline, I always find that low-fat cheese is tasteless. Better to use a little of the real thing, in my opinion!

Ladies, I used to buy low fat everything. Until I had cancer.Then my oncology nutritionist showed me labels. I just was desperately trying to lose extra unwanted pounds & thought that low or fat free was helping me....But everything low fat or fat free has way more ingredients than in regular. I say go for the real cheese Madaline, but don't go overboard & let him eat the whole brick of cheese at one time! Good luck.

Thanks Maria! I hope you are doing well.

Thank You. I am by His Grace & Mercy doing great.

This recipe sounds delicious. Do you have to drain the can of dice tomatoes or do you add the entire contents of the can? Thank you.

Lisa--how big are the chicken breasts you are using? Looks to me like 3 breasts on top of the veggies. The breasts I buy are packed in 3's and are approx. 20 oz for the entire pack. If I buy 2 packs, can I stack the breasts on top of one another and get the same result? If not, I guess I'll have to find bigger chicken breasts somewhere. Thanks in advance for your reply--I'm looking forward to trying this in one of my many crock pots!

I will try this recipe tomorrow for my family

@julie - do drain the tomatoes - I will change the recipe to reflect that important point - thank you!!

@Paula - as long as you use 2.5 pounds or so - it will not matter the size of the breasts. Thanks for your question!

Wanted to leave a comment stating that it is higher in carbs than what is listed on here. Just letting people know that Myfitnesspal states that it has 11.9 grams of carbs. 2.9 of those being fiber. That would make it come out to 9 grams of carbs. Still a great recipe that I'm going to try out.

I wonder how this could be converted to an Instant Pot pressure cooker recipe?

I first saw this recipe at Slenderkitchen. I was looking at the recipe and at the bottom it said to see full recipe at Snack Girl.

I am wondering why the nutritional information is different on both recipes. I am doing Weight Watchers original points and the points are different. Can you tell me why?

@Michael - I'm pretty sure that I got this right. Did you use the correct serving size?

@Beth - that is a very good question. I think it could work in the pressure cooker - but I need to work on it. Thanks!

@Jamie - I am not sure why the numbers would be different. Sorry about that!

Thanks for all the questions!

@Jamie - "original points" - as in, not SmartPoints, not Points Plus? I thought I was the only one still using the regular Points system! I've had such good luck with it - and have all my recipes calculated for Points, I just don't want to convert them to every new system WW comes up with. I hope it's going well for you, too! Take care!

Can you freeze for future use, if chicken breasts are fresh?