Can Domino's Deliver A Healthy and Tasty Meal? 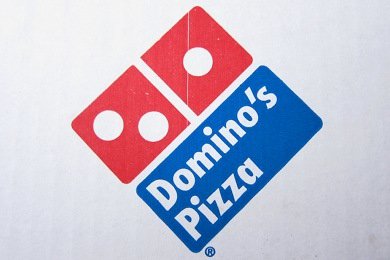 You would have to be living under rock to miss the Domino's marketing campaign. Seems that they changed their recipe, and their food doesn't taste like cardboard.

Actually, I had to laugh when I saw their commercials because they reflected EXACTLY what I thought of Domino's pizza from the single time I tasted it. My tasting notes ran something like: cardboard, ketchup, bland cheese with the consistency of glue.

(you can see their ads on the Pizza Turnaround website)

The whole concept of Domino's has been that they can get you a cheap meal in 30 minutes or less. No one seemed to care how it tasted or if it was good for you.

Their year long marketing campaign has featured the fact that their pizza is made with REAL food (not processed garbage) and made fresh. But, my problem is that everywhere I have lived (including the South) there has been a better local option to Domino's.

I have ALWAYS been able to find pizza that tastes better. I can't say it arrived faster or was cheaper than Domino's but my values are a bit different.

Never the less, I decided to give the new Domino's a try because I had hope that were going to pull it off. Also, I like that their site features their nutritional information (scroll to the bottom of the home page) - and you can use it to figure out what you want to order see here: Calculate Calories Domino's Pizza.

There is nothing inherently unhealthy about pizza. Pizza is a pretty good choice when as compared to other fast foods like french fries AND you can get it with lots of healthy vegetables.

Here is the photo of the large, light cheese, thin crust, spinach, and roasted red pepper pizza that I ordered and paid $6.21 for: 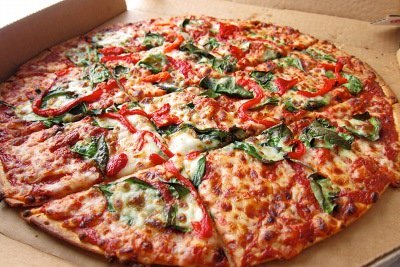 Yes, you heard me $6.21 including tax for a large pizza with two toppings. And I could end the review here because I think that says a lot about this pizza (but I won't :)

Let's start with the facts for one slice (1/8th of large pie) of pizza:

Not bad! I DID try to order the healthiest option. Here is the nutritional information for that same slice with hand tossed crust and the normal amount of cheese:

The sodium number here is out of control because this is just for one slice and you are looking at 22% of your daily value of sodium. Don't you dare eat another one.

So back to my spinach, red pepper option - my first question is where are the spinach and red peppers? Does that seem like a really small amount to you? I want lots of veggies on my pizza because I consider pizza to be a vegetable delivery device (not unlike tortilla chips).

And the taste? The good news is that the sauce tastes much better - lots of flavor and a bit spicy. But, the crust still tasted like cardboard (I think it was cardboard). It was a pre-frozen crust that reminded me of frozen pizza.

I hear the hand tossed crust is pretty good, but I can't waste the calories on trying this pizza again.

My suggestion? If you need a quick dinner, pizza is a good choice. I would go with my frozen pizza with added vegetables, your best local pizza place, or making it yourself.

Your pizza will take longer and probably cost you more, but it will be worth it.

Domino's IS better than it used to be, but still not the best.

Have you tried the new Domino's?

Want to read about snacks?
You Will LOVE This 81 Calorie Egg Recipe
Save Money, Your Waistline, And The World By Making Your Own Cereal
A Surprise Finding, Starbucks Serves Breakfast Sandwiches
The Cheater's Guide to Healthy Yogurt

http://www.littlecaesars.com/menu/nutrition.asp
Haven't had Domino's in a lonnnng time, but Little Caesars is DEFINITELY better than it used to be. Their Hot-n-Ready has become our fav (excellent crust AND sauce), given we can't get better for the price...$5/14-inch!

My husband likes Pizza Hut once or twice a year... as long as it's not more than that, I put up with it. I love making my own pizza once every one or two weeks. Homemade whole wheat crust with ground flax seed, tomato sauce, and light cheese is all I need on mine! My husband likes pepperoni so I at least get him the minimally processed kind with no nitrates or nitrites added.

Although I have not tried that particular combo from Dominoes I have to agree with you that their pizza ranks pretty low (along with Papa John's) on my list. My kids sometimes want to order from there and if I am not home they do, but if I am home and eating pizza we order from a local shop that has much better tasting pizza. I am not wasting calories on pizza I do not like!

We've done the Pacific Veggie on thin crust and I have been very pleased with it. I haven't checked the sodium content though. I only do delivery maybe once or twice a year, preferring homemade but when your in a bind it a big help. Toss a quick salad and it makes a good meal. I do agree that the pizza needs more veggies.

The hand-tossed is MUCH better, but it's mostly not that the crust is different, just that the outer crust has really yummy garlic salt on it (presumably held on by something buttery, I just know it stays and is a little shiny). I think it's worth trying considering it's easy to say you want extra amounts on the veggies, but hey, that's me....

I prefer to support my local pizza places run by local families. :) (and yes I pick up so that a family member that works there does not have to leave the oven to deliver my pie).

I would take a frozen Newman's Own pizza over Domino's any day. When we do order pizza, we prefer to patronize our favorite local, family-owned pizza shop - even if it is a little pricey, they use amazing ingredients, and you always have the option to buy by the slice :)

Wonder what the Delite Veggie pizza points are at Papa Murphy's cause it tastes much better than Dominos?!

I've tried Domino's once, I wasn't sure if it was the improved kind. The taste of the pizza I got (it was during almost the end of December 2010) and it tasted like cardboard. Even both my mom and dad say so, and they're people telling others not to insult food and be happy that you have some! The pizza in the picture looks good :)

It's weird - in the UK, Domino's is the MOST EXPENSIVE pizza chain, a large pizza costs about $20! They still taste awful though.

Our favorite pizza joint is Pizza Hut (pan pizza), however since I've started a new eating lifestyle, that is no longer in the books. We did order Papa John's the other night and my husband ordered his death by meats pizza and I had the Garden Fresh Pizza on thin crust. Wasn't near as good tasting as the pan pizza from pizza hut, although it was very yummy. I never would have thought that I would ever order a vegetarian pizza, I guess as you get older you get wiser. (And for all of you Weight Watchers out there, one slice is only 6 pts.)

which cheese do domino's use for their pizza

Thanks so much for sharing this!

Dominos pizza is very tasty.
I want to know what ingredians they use to make it healthy and tasty.

Do not listen to this article... this woman has absolutely no idea what she is talking about. Pizza is incredibly unhealthy... it's just fat and white bread which is essentially no different to the body than eating plain sugar. Yes, pizza is a healthier choice relative to worse foods but it is still a terrible choice compared to all the other choices of meals you have. If the pizza was made on a whole wheat crust that would at least be a step up since the crust is the unhealthiest part. Also, most people eat several slices of pizza... it's incredibly nutrient dense in badness. Try cooking some chicken and veggies for dinner instead.

Domino's is the only pizza delivery service that offers a gluten free option in my hometown - sometimes, even though it's not the best thing for you, their ability for me to enjoy a fast pizza again makes it totally worth it.

@Valerie: Beware that their Gluten Free is deemed not safe for celiacs because there is gluten in their shared kitchens... https://order.dominos.com/en/pages/content/customer-service…