A Game Changer at McDonald’s 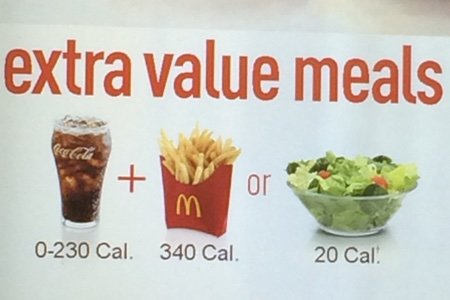 I went on a trip to Arizona last week and found myself at McDonald’s at 10 PM and I was hungry.

McDonald’s was the only place open on the road I was travelling. My eyes were tired but then I saw it.

A Side Salad instead of Fries on the Combo Menu!!

What? You can’t be serious? Hallelujah and Amen!

McDonald’s installed a new CEO six months ago and it has been using kale in its salads, buying antibiotic free chicken, and spearheading efforts to feed Syrian refugees.

What is going on here?

I believe they are listening to us – the consumers who want McDonald’s to pay their workers a living wage, give us healthy options, and have them be a socially responsible company like Starbucks, Chipotle, etc.

I have been writing about McDonald’s for years because it feeds 69 million people every day. About one percent of the world’s population!!

You cannot dispute that if McDonald’s starts to serve healthier food it will have an impact on our nation’s overall health.

I went back to McDonald’s to order the side salad in my combo meal to see if it was any good for lunch (I bought a sugary smoothie to get me through the late night drive).

My first problem was (after ordering the side salad) – they gave me the fries. My mouth dropped open as they spilled all over my tray. 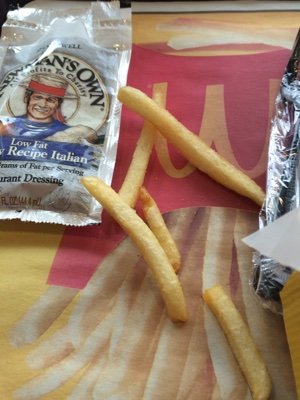 The female employee saw my shock and removed the package of fries and replaced it with my side salad. I still got a few fries though and ate them. I find it very hard to resist wayward fries.

Then, I had my burger (without cheese) and my side salad. 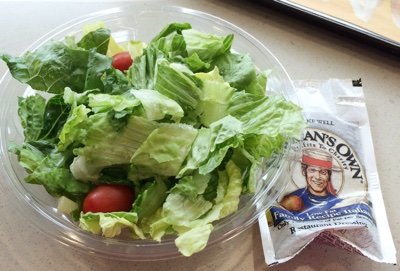 This isn’t going to win any award such as “Greatest side salad in the world” but it was fine and much much much better for you than the fries.

I know most of you want to have nothing to do with McDonald’s and I am not suggesting this is now a wonderful place to eat. I believe the addition of a side salad is an indicator that it will become easier for all of us to eat healthier whenever and wherever we go.

We cannot blame lack of time or money for our lapses when McDonald’s (of all the places!) starts offering nutritionally sound and affordable options.

What do you think of the side salad at McDonald’s?

How to Survive McDonalds: A New Way to Order

I received an e-mail from a reader who was stuck going to McDonald's because her co-workers wanted to stop there after an offsite meeting....

Starbucks' Oatmeal vs. McDonald's Oatmeal - Which one should you choose?

Last week, I posted What You Need To Know About McDonald's Oatmeal. Immediately, I was asked about Starbucks' oatmeal....

You should give the sweet thai mcwrap with grilled chicken a review. 410 calories and stuffed with veg, it's actually healthier (and tastier) than anything I eat ate at other chains.

Whether or not we eat at McDonald's, it is hard to deny that hey have major influence over food practices. Thank you for this very happy news!!
Meanwhile, when I was in college in the 60s one of my professors noted that "McDonald's shakes are thick even at room temperature." HMMM???

I've been loving the smoothies at McDonald's and Dunkins all summer long. Could you do a review on those?

I've been getting McDonald's side salads for years.

At $1.00, it is much less expensive than buying each of the items at the store individually.

I live alone, and like my salad ingredients very fresh: the McDonald's side salad never fails at crunchiness.

Add their unsweetened iced tea (with as many lemon slices as they will give me): makes a great breakfast, lunch or dinner.

Other ingredients can be added, of course, to make it more filling. The dressing choices are great, but I prefer the taste of vegetables without dressings.

I think it is a great idea but mostly for situations as you discussed where you pretty much have NO other choice OTHER than to go to McDonalds.

My older Sister used to work at a McDonald's, working her way to shift manager in less than a year. Dropping her off at the beginning of her shift or picking her up at the end of it always resulted in us eating there. Makes you kind of sick of the place due to the lack of choices back then. To see that they actually have mini wraps, meal wraps, and huge salads now is fantastic. A snack wrap with a huge salad and a water and my lunch or dinner is set ^_^

The problem that I have had with this choice is that the cashiers do not know how to ring up a value meal with a salad as a side. They always tell me they don't know how to do it as a meal, but they can ring it in separately. This makes the meal a higher cost than one with fries. If I protest, it holds up the line for everyone else. It's still a big pain. Id rather go to Wendy's. They have always (or at least for as long as I can remember) had many choices of side order with the meals, including salads.

@Bittytux- That is what happened to me! They couldn't figure out how to ring up the side salad even though (as you can see) it was a choice on the menu. Weird. I suggest getting a hamburger, side salad ($1.69) and a coffee. That is under $4.

I think it depends on the mcdonalds. My husband and I were at our mcdonalds and asked about switching the salad instead of fries and they said they don't do that anymore. This was a week ago.

It seems from the comments that McDonalds are somewhat variable and it depends on where you live. I have seen whole wheat buns/salads in Canada and veggie burgers in the UK. The McD's in the USA seem to have the unhealthiest options from my experience limited though it is.

I don't want to read anything about McDonald's being remotely healthy... Not good planning if you find yourself there at 10:00 PM... No one should be eating anything at 10:00 PM unless you're a second shift worker. I'm sure the salad was sprayed with numerous pesticides and who knows what all other chemicals to keep it green. Really? I won't even buy bottled water at McDonald's... I am unsubscribing from this site...

In Germany they serve beer at McDonald's! Now I could into that! :o)

That is a sad looking little salad. It's like all romaine and 2 cherry tomatoes. Lol. I paid very close attention to how my Grandmother packed when we went on road trips. We would pack a cooler that had mostly fruit in it and pre-made sandwiches that she wrapped in wax paper and then put in a ziploc bag. Since we were kids we would have chips, but my grandmother kept the cooler as healthy as possible, so we didn't have to stop to eat. It saved, time, money, and calories. I've had the bigger salads and I wasn't all that impressed a prefer Carl Juniors, but I don't use the dressing I have dressing that I make at home. But I do have to admit in the winter I love Wendy's Chili.

Thanks for the update on something more healthy from McDs. Living wage???? Jobs at McDonalds are not intended to be a full time job. Why ask or force a company to pay employees more who are not willing to get some basic training and get a vocational job. Please leave the social comments out of your wonderful blog.

I wish there was a healthy option for someone who hates salad...like me. I don't like the taste or texture of lettuce so seeing my option as a bowl full of lettuce or fries makes me sad. I will admit to occasionally coveting the the fruit cups on the kids meals.

@ Lois Madrie: I believe Snack Girl was driving through the night. You may want to try not being so judgmental...

Have you ever tried one of their main salads. If I ever happen to be at McDomakd's I it'd er the southwest salad with grilled chicken. I take off the tortilla crisps and order the balsamic vinaigrette. It very good and enough for a lunch or dinner. The whole package of the vinaigrette is only 45 calories or 1 WW point

Holly- you can get the children's meal if you want. At least the McDs I've been in don't care what age you are!

I like their side salad a lot- I usually bring it home and doctor it up with fresh tomatoes and sliced cucumbers. i have found the best way to get it in a combo meal (which I don't personally eat- I get it for my husband)is at the end of the transaction I ask for it. They seem fine with that. It is sad it has to be difficult for them to ring in- most people don't order it I suppose. that plus their unsweetened iced tea are the best things on their menu, health wise. I do pick out the sorry cherry tomatoes- I wish they's actually leave those out as I add my own fresh ones. Shaved carrots is what they should put in.

lol --the wayward fries! :) My dh always orders fries and I have to have at least one--so I look for the biggest one! :) Good on ya for choosing the salad!