Evidence That Junk Food Snacking Will Shorten Your Life

The guy above is DOOMED! Eating chips in front of the TV (at least he measured out a bowl of them - but look at the size of it). Yikes! 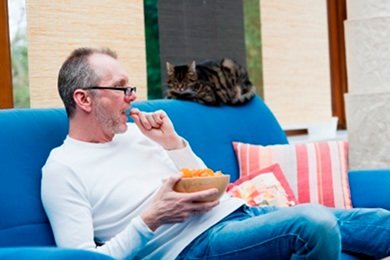 Snack Girl doesn't want to be so dramatic, but a recent study by a team headed by Liza Makowski, Ph.D at the University of North Carolina has some pretty damning evidence about unhealthy snack food.

Liza was kind enough to allow me to interview her about the study of different diets on rats. You see, you aren't allowed to shove people in a room and feed them whatever you want for days on end and then test them. Not legal or very cool (unless it is a reality TV show).

Snack Girl: Why did you use rats to test the differences in consuming different diets?

Liza Makowski, PhD: Rats and mice are great models to study human obesity. We can track exactly what they eat, which is often a challenge in human studies.

Snack Girl: What is in the "Cafeteria Diet"?

Liza Makowski, PhD: We are interested in studying the causes of obesity so that we can understand it better, with the goal of preventing and controlling it. Most people use a manufactured lard-based diet in animal studies even though humans are not consuming lard every day.

We offered 3 different snack foods a day plus the standard chow pellets that rats normally eat. This diet more closely mimics what kids and adults in America are actually eating and will help us to better understand the formation of obesity and diabetes.

Snack Girl: What happened to the rats that were fed the Cafeteria Diet and why is your result important for humans?

As part of the Cafeteria Diet, the rats were also offered a choice of the standard chow pellets that a separate control group of rats were fed which contains a healthy mix of ground up oats, barley, wheat and corn.

It was no surprise that the rats overwhelming ate the snacks, even when they were getting severely obese! Using this experimental diet showed us that these rats could not stop eating this highly palatable snack-filled diet which further supports that it is hard for humans to put down the snacks!

Snack Girl: How much packaged snack food do you think we should consume on a daily basis?

Liza Makowski, PhD: I am not a registered dietician so I can’t comment on specifics of a daily diet, but I can tell you that when I pack my son’s lunch for kindergarten, I provide packaged snacks like a Kashi granola bar or crackers like Triscuits (along with a healthy lunch including a pro-biotic drinkable yogurt, sandwich on wheat bread, and a fruit).

Snacks are not the enemy. They are very convenient and portable- the danger is consuming too many of the bad ones. Many packaged snacks are high in salt, fat and trans-fat, and low in fiber.

And the worst snacks for you are often the cheapest, so it is easy to fall into the trap of eating lots of cheap low nutrient snacks. For my family, those are “sometimes” treats like when we go to a movie or have a party.

Snack Girl: What is your favorite snack?

Liza Makowski, PhD: My mom always had a snack ready when I came home from school. It was no wonder our house was where the kids hung out. I grew up eating potato chips and sour cream dip in front of the TV.

Now, I try to treat my body with more respect! For family movie night with my kids, I love to make homemade popcorn with a little oil in my stovetop popcorn maker and a shake of sea salt. My husband adds cayenne pepper to make his spicy.

I would love to snack all day, but I know that it is just not smart. I don’t keep junk food at home and I never keep it in my office since I would never stop snacking- like the rats in our study.

Thanks so much for all the hard work, Liza. Check out Snack Girl's healthy French Onion Dip recipe and you can go back to eating dip (but maybe not in front of the TV :)

Want to read about snacks?
Turn Strawberry Shortcake Into Strawberry Healthycake
Which Bread Is The Healthiest?
How Do You Like it? Water Enhancer With or Without Chemicals
Sweet Corn Is A Stellar Snack

I agree, it's just way to easy to get sucked into the convenience of pre-packaged snacks. Portion control and ziploc bags are the way to go!

We also need to lead by example. We are so addicted to junk food that we can't stop eating it, thus our kids want to eat it too.

I agree. I simply don't buy snack foods. There's nothing that says these foods are "neeeded." My main indulgence, though, is trail mix but I haven't bought chips, crackers, cheese,soft drinks or deli meats, etc. in more than 5 years...

Great post about how much food, no matter where we go, is enticing us to eat it and then we do get "addicted". People have to educate themselves on what they put in their mouths and what it will do to their health. That's why your column is so awesome! Must educate and yes, lead by example or there will be more health problems and most stem from food we eat over a period of time. Get off the couch, eat healthy and enjoy your family. Mother Nature herself has provided us with so many things. Be good to your body and you will live much longer!

Thank you so much for this post and to Lisa Makowski for doing the study! I agree completely that it's so easy to snack when it's in front of you, especially oversnack because you don't get the "full feeling" from typical junk foods.

It's so frustrating to me that an apple from a fruit vendor by my work is 75 cents where I can get a big bag of chips for that. Of course someone that's not very health conscious would pick the chips. I am taking steps towards being healthy and like Lisa said, treating my body with respect.

Can we get this featured somewhere? Like the news or something?

I use to eat like that all the time. Unhealthy, unhealthy. I actually changed at a very young age. At the age of 11 or 12! I still do eat unhealthy things, but it has dramatically decreased. I try not to buy packaged food (I usually get Wasa Crackers, or puff rice cereal for my packaged food).

Good article. I agree this also explains why the Americans are also most likely to be obese cause bad snacks are plentiful, cheap and convenient! And in this economy today he that is what most are buying.

@ Leslie, cheese is actually healthy for you (real cheese, not processed cheese). If you're worried about saturated fat there is low fat cheese. Dairy products are an important part of anyone's diet.

@sallyjrw...Thanks but I'm good without it. I get plenty of healthy fats from other foods. About the only "cheese" I eat is cottage cheese w/fresh fruit.

@sallyjrw...I really meant junk "cheese" like nacho cheese, fettuccine and all the other crap people insist on slathering on their food. I had an engagement at Olive Garden and they encrust almost every item in some sort of creamy cheese. It's gross and unhealthy. They can call it cute names all they want but it's still very expensive junk food and I don't buy snack/junk food meaning rotel, cheetos, mac and cheese or even eat any other type of cheese other than cottage cheese and that's not often.

I had read about the study before; so it is great to read this interview with Lisa Makowski who headed this study. Almost every research shows that junk and processed snacks are bad, and it is crazy that people still keep eating them. They are quite addicting indeed.

I also do not keep junk food near me. I keep natural fruits instead to crave my hunger between meals.

Hello(:, Reading this article about rats relaly opened my eyes! Showing the difficulty of being obese can relaly affect one's health! I think Michelle Obama is doing a great thing by starting an organization like that. She is a true role model to all in America. The types of food we eat present day have gotten out f hand. Kids are now getting diabetes more, obese has become one of the biggest problems in America, and that no one relaly gives thought in what they eat or drink. I am glad that I am not obese but I feel sad for those who are. Having the experiment about the rats showed great results. Though I feel sorry for the rats who ate the junk food, are they obese?! (: