Is This The Spaghetti of Your Dreams? 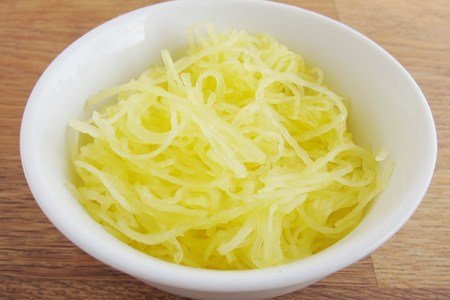 Want your pasta to be zero calories and still taste like pasta? Maybe I have found a solution.

Snack Girl evaluated Miracle Noodles last year and decided that they were less than miraculous.

But, there is another alternative from the non-processed section of the supermarket: the spaghetti squash.

First, you have to find it. I found it easy because it was labeled “spaghetti squash”. Here is a photo for those of you who aren’t as lucky: 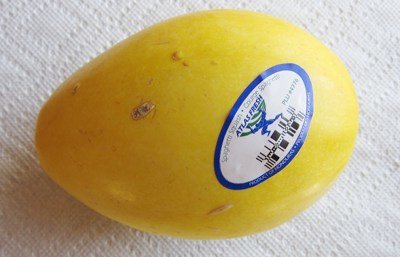 It kind of looks like a mango, no? Then, you have to roast it (directions below). Finally, you get to decide if spaghetti squash can hold a candle to spaghetti.

One cup of cooked spaghetti squash is 42 calories versus spaghetti for 221 calories so if you liked it and were trying to cut back, this would be a great option.

After roasting mine, I decided to try it with some salsa and cheese because there is almost nothing I won’t eat without salsa and cheese. I found it to be crunchier than spaghetti and it doesn’t taste like much.

Did I like it? It was pretty good. Much better than the Miracle noodles, but still not spaghetti. The texture wasn't quite right and I found it a little strange.

I think it would be better if it was sauteed with some vegetables like this recipe: Spaghetti Squash and Chard Saute.

Have you tried spaghetti squash? Please share how you serve it.

Preheat oven to 375 F. Using a sharp knife poke the spaghetti squash about 12 times at least an inch deep (this is to prevent pressure from building up inside of the squash and having it explode in your oven). Place the squash on a baking sheet and roast until soft.

Slice the squash in half and remove the seeds. Using a fork scrape the inside of the flesh into a bowl creating strands of squash. Use for a replacement for spaghetti or rice.

Love Rice But Want To Cut Calories? Try This

Snack Girl did something different the other day to her favorite "rice and bean" bowl. She substituted a vegetable in the bowl above...

Which Should You Buy - Whole Wheat or Regular Pasta?

My son has one food that he talks about incessantly. You guess it, KALE!...

I typically cut mine in half, scoop out the seeds, drizzle with olive oil, and roast at 425ºF until the insides are slightly golden brown. Usually 45 minutes. If it's still crunchy, it's not fully cooked. I love using spaghetti squash as a replacement for spaghetti with my favorite meat sauce, made from 99% fat free ground turkey and lots of veggies. Give it another chance. :)

I have tried Spaghetti squash before. It's hard getting used to but my husband, our youngest and I can't tell a diff anymore with the Alfredo sauce or chicken parm. Also I ring out the extra water in a towel and add salt, pepper, parm cheese, and sometimes herbs to it.

Snack Girl. There is a much easier way to cook this delicious spagetti alternative. Just cut in half (on horizontal). Place in glass dish with some water and microwave for 5-7 minutes. More is larger. Scrape out seeds and voila!!! I just love this veg with a tiny bit of butter and a sprinkle of parmesan cheese!!! I could eat the whole thing!!!!

I tried this some years ago, it was pleasant, but a little too moist to get that satisfying pasta "chew" (though I did bake it to try and dry it out a bit).

I got a better result - albeit via a fiddlier process - cutting yellow courgette/zucchini into thin strips and baking them in the oven, and then using it as a kind of vegetable tagliatelli. Tagliatelli is always a bit floppier and less chewy than spaghetti anyway, so perhaps that helped. And the courgette strips were a little firmer than the spaghetti squash.

I do think that one has to eat it with the mindset that it's a vegetable, though, and not try to pretend it's actually pasta. Then any pasta-like quality is a blessing on top of the fact that you're eating a lovely healthy vegetable.

It is also good mixed with some chopped spinach, ricotta cheese, some jar sauce, top with whole wheat bread crumbs then bake until cooked through. Almost like mac and cheese.

I love Spaghetti squash! I use it in place of spaghetti in a number of things. Cut it in half, scoop out the seeds and put it in a dish with some water, nuke it for about 10 minutes and its ready. I mix it with a couple wedges of Laughing Cow and some fake egg, then top it like I would Baked Ziti and bake. Fantastic!

I tried as spaghetti once and was not sold. I think istara is right pretending its something it's not didn't work for me. The chard sauté sounds good, I think I would prefer it prepared like that.

I love spaghetti squash - but I don't delude myself that it is a pasta substitute. For me, it's just something else I like to eat. I do use it as the center of a meal - I particularly like it tossed with pesto and maybe some fresh mozzarella or parmesan. And some roasted cherry tomatoes. And shredded fresh basil. And maybe some pine nuts. Ok, I am getting hungry!

We just had spaghetti squash for dinner last night! I cut mine (used 2) in half and scooped the seeds before I roasted it, but I don't think there's a wrong way to do it as long as it's soft enough to scoop:) We mixed ours with sautéed spinach, tomato sauce, basil and mozzarella and baked til bubbly. It was tasty and satisfying but a little watery; I will wring it out next time like recommended above.

I nuke the spaghetti squash, but don't cut it in half - I stab it with a knife several times, put it in a casserole dish and nuke it until the skin is softened - easier to cut (I turn off the microwave turntable so the dish will fit. LOVE spaghetti squash!!!

I love spaghetti squash. It is the base for my favorite entrée at Ruby Tuesdays, spaghetti squash marinara. They top the spaghetti squash with roasted red pepper marinara sauce and broiled zucchini slices. It is super-delicious with just a sprinkle of parmesan on top. As prepared (without the cheese or the biscuits they serve on the side) a serving is only 260 calories! It has tons of flavor and is really filling, all without any meat. I have tried to replicate this at home with varying success. I'm pretty sure they use olive oil in the squash and roast or sautee it. Mine was good but did not have quite as much flavor as the restaurant's version.version

This is a WW recipe that is really good. I love sage and it was great with the spaghetti squash. http://bit.ly/XYLwkb

I cut mine in half and brush lightly with olive oil and a pinch of cinnamon .....the trick is to cook it upside down on baking sheet.....40 minutes or so at 400 degrees. I'm addicted to it....I use it as a side dish or spaghetti substitute or load it with sautéed veggies and chicken....like a stir fry....

I had spaghetti squish last night with my homemade sauce! I love it but it's not a pasta replacement. If you're craving pasta have pasta. I also love the squash in veggie stir fry.

I agree with the above commenter that if you don't delude yourself into thinking it's an actual pasta swap (way different texture!), spaghetti squash is a nice healthy vehicle on which to place all of the yummy toppings that you would normally use pasta for.

I actually love spaghetti squash but started making it as a side dish and not as a spaghetti substitute. Now I will sub it for spaghetti or add it in to a whole wheat or brown rice pasta dish.

Thank you so much for this! I picked up a spaghetti squash last night and then put it back because I was unsure how to cook it! Lots of advise here, thanks so much to everyone!!

I LOVE Spaghetti squash -- I made it just last night. If you're in a rush, you can actually cook it in the microwave, too. Just cut in half, scoop out the seeds, and nuke it, face-down, on a plate for 7-10 minutes.

I love spaghetti squash! No, it isn't pasta, but I prepare it in all the ways that I enjoy the real thing and it is delicious! I just like all the things you can do with it: toss with fresh parm, roasted vegetables, a chunky, homemade red sauce... thanks for all the microwave tips - great to have a quicker way to get it on the table!