Do Something Different With Watermelon 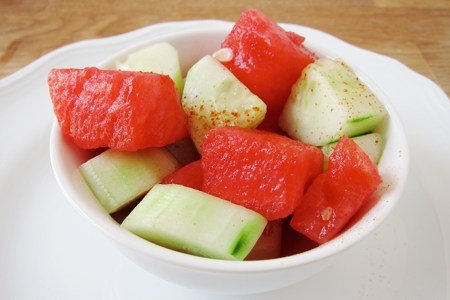 Sometimes it is hard to buy one of those LARGE watermelons. Are you really going to eat all of that?

One way to deal with too much watermelon is to use your blender and make watermelon juice. Just chop it small enough for the blender to handle it. I like to mix in some vodka lightly sweetened lemonade.

Or, you can take a slice of watermelon, squeeze on some lime, dip it in a bit of kosher salt, and sprinkle on some chili powder. The combination of sweet, salty, sour, and spicy is a taste explosion – and while risky, the risk is definitely worth it.

I learned about this taste combination from a Mexican chef. He told me that in certain regions of Mexico, they sell pineapple on a stick prepared in this way.

In the below recipe, I have used the same combo with cucumber to make a crunchy side dish to your BBQ. This salad is best served right away and as cold as possible.

I put the cayenne down as “optional” because it takes bravery to add this spice to your food if you aren’t used to it. I did sneeze quite a bit after adding it but it gives this recipe a KICK.

Which brings me to the story of my first visit to a vegetarian restaurant, The Moosewood Restaurant in Ithaca, NY. I couldn’t wait to go there because I had a few of their cookbooks.

Boy, was I disappointed! The food was so bland that I still hold a grudge. There is no reason for healthy food to be bland, boring food. Go ahead and eat your steamed veggies with brown rice with a wee bit of soy sauce – but I’m grabbin’ the Tabasco.

Have you tried a savory watermelon recipe?

Chop cucumber in one inch cubes and mix in large bowl with watermelon. Squeeze lime over mixture and add salt and cayenne. Toss and serve immediately.

This salad doesn’t store well because the watermelon tends to get soggy after you add salt.

I don’t know about you, but I am hot! The heat wave here in Massachusetts made me feel like the Wicked Witch of The West....

One More Thing To Do With Watermelon

Snack Girl has been obsessed with watermelon. My fridge seems always to have half a watermelon staring out at me....

Just curious. Why is this 1 PointsPlus?
Thanks for all the great tips !

Love watermelons and these look so refreshing. Same Qs as Sandra - what's 1 Pointplus?

Watermelon is one of the best things about summer! I bought a personal watermelon yesterday, it's a much more manageable size. My sister made a salad of watermelon, feta cheese (the lowfat version is really good!) and fresh basil. YUM!

Watermelon is a great fruit to freeze - spread out chunks on a baking sheet and freeze for an hour or two. Then transfer to a freezer bag. (If you put it in the bag and freeze that way first, it will freeze together in a clump.) Then you can remove pieces to add to smoothies, or...our favorite...use as the base for frozen watermelon margaritas or mojitos!

@Sandra - well, my understanding is that fruits and vegetables are ZERO if you just eat them - but if you use them in a recipe then you need to count them. There were some changes in February to WW PP and I am just getting my arms around them. Am I wrong? Any help would be appreciated.

I was just craving watermelon -- but was sure I couldn't finish a whole one on my own!

From what I can see, this should be zero PP.

If cayenne is to much keep an eye out for fruit chile. Its a pre-mixed rub that is sold in some grocery stores. It has the same spicy,salty taste. Here in south Texas its used for everything from pineapple to corn.

This is delicious, as a Mexican, I eat most of my fruits with lime and a little spicyness. My favorite snack is a mix of watermelon, melon, and pineapple with lime and hot chili powder. Yummy!

Hmmm, Ive never considered making this type of salad. The taste must be explosive. Plus these are water based vegetables. Very clever!

Love the idea with cayenne and cucumber!

As a western Canadian, I can only HOPE to buy a real, large, seeded watermelon. All we get up here for a reasonable price is the seedless stuff. The last time I saw an old fashioned one it was $15!
One of my favorite ways to eat watermelon is with feta.

This article is hysterical. Love you, Snack Girl! I will definitely be substituting something for the lemonade in my watermelon juice. :)

Speaking of watermelon salads, I just came across this recipe using an avocado!
http://www.tastingtable.com/entry_detail/chefs_recipes/9419
It sounds delicious. I may try it with just few of the ingredients listed. I'm sure it'll still be just as good. I'm for sure trying the cucumber one you suggested as well...going to add feta cheese to it too. Yum!

So if this theory about counting 0 PPV value foods in a recipe is correct, does that mean there is no longer a "zero points soup"? I am only doing WW online so I don't have a leader to ask questions.

If you add all the ingredients together on the online Recipe Builder for a vegetable soup made with no fat and vegetable or beef broth, it comes out with a PPV of 3 or 4. The same goes for fruit salad -- if you put your chosen fruits all together in the recipe builder it would come out with a PPV. But if it's just raw fruits and veggies tossed in a bowl, why does that change the PPV from 0 to 1, 2, or 3? This is supposed to be the difference between using WW versus an app like My Fitness Pal, which just does the calorie thing.