The Tale of Two Burgers: The Beginning 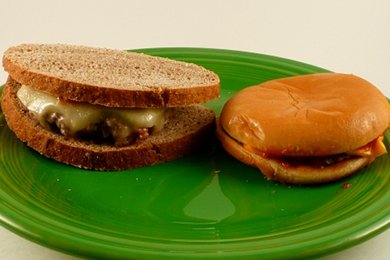 After much analysis, Snack-Girl has decided to revamp her experiment with the McDonald's Cheeseburger. I doubt McDonald's cares, but I believe I was unfair to the global corporation.

If you have been following Snack-Girl then you have seen:

The idea was to buy a McDonald's Cheeseburger and leave it on my bookshelf. I had heard of a 4 year old burger - and I wanted to test if it was possible.

Why buy a fast-food burger to see if it would rot?
I wanted to test if this food is really FOOD. Why is that important? Some of us eat these products once a week, or every day, or multiple times a day and it contributes to our overall health as a nation.

From the beginning, I believed it would rot and so I didn't do a very scientific experiment. I am a trained scientist, and I knew that my experiment was kinda silly. BUT, I never expected the hamburger to do anything but rot.

Since my first post (McDonald's Cheeseburger), readers have been writing me about this idea. Many other people have done similar crazy things with McDonald's food and come up with the same results.

Here is one example of a one year old, Happy Meal - Happy Birthday!
Consumerist's Happy Meal

But, the two biggest complaints about my experiment were:

1. No control burger. How would a homemade hamburger do on a bookshelf at room temperature?

2. The humidity wasn't controlled. Obviously, if you leave something out and it dries up then it never gets a chance to rot.

I believe that the burger I purchased in January just dried up. Someone pointed out that archeologists have found food in Egyptian tombs that were just dried out and recognizable! I am sure my 35 day old burger would make it to 3010 in a tomb.

Because I am a SUPER GEEK, I decided to do a new experiment. Above, I have photographed a new McDonald's Cheeseburger and one that I made myself. They were both made on the same day.

My burger features ground meat from Stop-N-Shop, homemade bread, and Vermont cheddar cheese. I decided that I couldn't spend $8 a pound on organic beef just to throw it away. Doesn't it look so much tastier than the McDonald's burger?

In addition to the control burger, I am putting both burgers in Ziploc freezer bags at room temperature (about 68 degrees) to seal in moisture.

Here are the rules:

I hope this will satisfy my critics and be fair to McDonald's.

What do you predict will happen?

Want to read about snacks?
How to Replace Butter without Sacrificing Flavor
No-Bake, Nut Butter, Oatmeal Cookie
Save Money, Calories, and the Environment with this Yogurt
Quick and Healthy Pizza

I love this experiment. I can't wait to follow along and see what happens.

I do the same silly experiments (and stress a little about the lack of control group). I love that you do it too!.

is this like the growing mold on food experiment from science class? well i am awaiting the results.

It's not going to rot!

Can't wait to see what happens!

It will be crazy if McD burger doesn't but seems that may be the outcome...

I'm excited to see what happens!

I will be keeping an eye on this experiment!

it's a shame you didn't do a scientific experiment that actually deals with the real issues involved. i'm really disappointed. (see my post on day 11 for how badly you anti-geeked this)

We are doing this experiment in my classroom after seeing your first experiment on day 11. My classes decided to include cheese burgers from our school cafeteria, Whataburger, Burger King, Jack in the Box, Wendy's, as well as a homemade cheese burger and a homemade vegan burger. So far, we are on day 29 and the Burger King, Whataburger and Jack in the Box are the only burgers that have not molded. I bought another Mc Donald's burger last week to see if it was just a fluke that it molded on day 9. Please email me, Ms. Snack Girl, if you are interested in our results.
Thanks for putting some excitement in our classroom,
Mrs. Bahe
Cibolo, TX

I'm doing a research project about Food Additives for an english class and I was just wondering if I could mention you and your "Tale of Two Burgers" story in my speach. It would be greatly appreciated!

I don't think I would ever eat a burger on homemade bread...I would use a store bought bun. This is not the greatest comparison because most people buy premade buns.

It's not because it's not food that one rotted and one didn't. It's because you didn't do the experiment right.