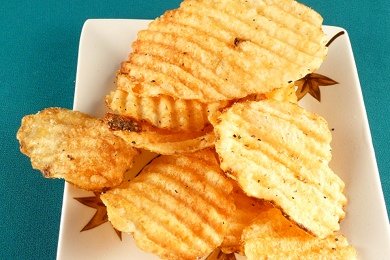 In 2005, 16.4 billion dollars were spent on potato chips globally. Potato chips captured a third of all "salty snack" spending for that year. Picture a MOUNTAIN of chips eaten every year.

Are potato chips really bad for you? Eaten in moderation, there is nothing wrong with potato chips. For one thing, you can find potato chips with simply potatoes, oil, and salt. They don't need preservatives or artificial flavors like some other snacks to taste great (see Doritos and Cheetos).

Potatoes are REALLY nutritious. All on its own a potato has as much potassium as a banana, Vitamin C, protein, and other needed minerals. Humans have survived on not much more than potatoes in the past.

During the Irish potato famine, a third of Ireland depended on the potato as a primary food source. The potato crops caught a blight and over 1 million people died of starvation.

BUT, when you add oil and salt, all of a sudden you change the nutritional make-up of this vegetable. Potatoes on their own have zero fat and very little sodium.

After cooking, a serving of potato chips has 8 grams of fat and 100 mg of sodium (depending on the brand). So, sadly, you can't get away with eating these and not adding to your waistline.

Choose potato chips over Doritos and Cheetos when you are in the snack aisle and try not to eat too many!

Want more like this?
What is the vegetable in these chips? Potatoes
Corn, oil, and salt combined to fill you up
America's Favorite Vegetable