You Can Make Your Own Donuts (Without A Deep Fryer)

Snack Girl has a donut problem. She can tell you within a five mile radius where all the delicious donuts can be purchased.

In fact, Saveur rated a cider donut (about two miles from my door) as the NINTH best donut in America. Yikes!

When I saw the donut pan below on another food blog, I was excited. Moi? I could bake my own donuts? Could it be as good as a deep fried donut?

I told a few friends about my idea and everyone thought I was nuts. But, I had to try because of the awful nutritional facts for donuts. For example - Little Debbie powdered sugar cake donut:

That is just one!!! The sodium here is what I wasn’t expecting. Why is it 400 mg? That seems out of control for a sweet food.

I drove to Bed, Bath, and Beyond and bought the donut pan below for $9.99 for my experiment. Then I fooled around with the recipe adding white whole wheat flour and reducing the sugar and salt.

This is what they looked like out of the oven:

I gotta tell you, these were good. Part of the reason is that they are warm out of the oven when you eat them. Yum! They are fluffy, not too sweet, and have a nice cake texture.

This recipe is the base recipe for other additions (such as blueberries or cocoa powder). If you guys like these, I can keep working on new flavors.

Would you try to make your own donuts?

Preheat the oven to 425 F. Spray a donut pan with non-stick spray.

Mix together the flour, sugar, baking powder, cinnamon and salt in a medium sized bowl. Add the buttermilk, egg, and butter and mix until well blended.

Spoon into donut pan and fill wells until 2/3 full. Bake for 7-9 minutes until top of doughnut springs back from your touch. Allow to cool for 4-5 minutes before removing from pan.

In a ziploc bag, add about 1/4 cup confectioner’s sugar. Add donut and shake until coated (repeat). Serve warm or store in a sealed container for later. 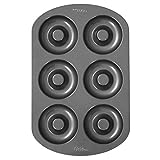 Snack Girl reserves black and white photos for foods that trigger people to eat. One of my pals told me that my photo of onion rings made her hungry and ever since then I use black and white....

Reduce Your Muffin Top Today With This Simple Step

Do you think I am talking about that muffin top above? Naahhhh.....

That's quite a difference in calories and macros! Thanks for the recipe

I have so many donut pans of round and heart shape, yet I haven't made donuts in months and I mean months. Thanks for reminding me and thank you for the recipe!! Going to give it a try!

I've shared (both the recipes and the goodies) 3 different recipes at my WW meetings. They were thrilled to know they could still eat donuts!

They look lovely! Have to practice mindful eating though to make sure I don't eat them all straight out of the oven!

Was I reading into this too much or was snack girl really excited about this post? Think I might have to try this. Thanks for sharing.

I AM excited. We made donuts all weekend, I am happy to say. We added blueberries in small amounts and they were quite good. As for gluten-free - maybe GF girl has an option? I am not talented in baking - every once in a while I get something right. Thanks for your comments!!

I am also interested in a gluten-free option. I've had a lot of luck with this GF flour blend recipe, and I'm wondering if it would work for these doughnuts.

(I also add some xanthan gum to some recipes, and the amount of XG varies depending on the recipe. the XG bag usually has guidelines written on the back.) Precise measuring is very important for GF baking. You need to pour the flours into the measuring cup instead of scooping. When you scoop, you can get up to 20% more flour than when you pour. It can mess up a recipe. GF recipes are very tricky this way.

All of these ingredients are pretty inexpensive, and I think that the cost of making this flour blend is on par with buying regular wheat flour. I keep it in an airtight Tupperware container in my pantry, and it stays good for a long time. I buy my ingredients for this at Ocean State Job Lot, btw. Very cheap.

Those look great! I really need to get a donut maker. They truly are the best Sunday morning breakfast!

I can't wait to try these! I haven't had a donut in 6 months! Also, I bought the Healthy Bread in 5 book that you mentioned and am in love with making great healthy artisian style bread.

I'd love to see some more donut variations. I can follow a recipe but not very adventurous. Thanks Snack Girl - I love your blog!

Your timing is perfection! I am having a coffee-themed party this weekend and was thinking of buying some locally made donuts. I think it would be WAY more fun to make my own though. Thank you! I'm wondering if adding cocoa powder to some of them would work to make chocolate donuts...hmmmm....

Snack Girl- I too have a love for donuts! While my friends drool over cupcakes, I admire the box of donuts next to them. I just discovered a place in Chicago, not far from my house, called Dazed and Infused. This place should be illegal! They even have a maple/bacon donut! Yikes.

Thanks so much for this post. I'm definitely going to have to give it a try!

How about low carb options, ones that use ground flax seed?

Thanks for this! I tried one from Epicurious and they were not tasty. Looking forward to trying!

There are gluten-free donut recipes on www.edibleperspective.com.

@Laura - you beat me! I was going to recommend Edible Perspective as well. :-) Love her site - and she has a new GF donut cookbook coming out soon - yay!

I love my donut pan. For those of you who were looking for a gluten-free recipe, I have a recipe for gluten-free, vegan apple cider donuts on my website. They are so good! http://welcomingkitchen.blogspot.com/2009/11/not-just-any-a…

What about the electric donut makers out there now, would they work the same?

I would love to try this recipe but I never have buttermilk on hand - any suggestions on what I can substitute for the buttermilk?